On the Origin of Species | Study Guide 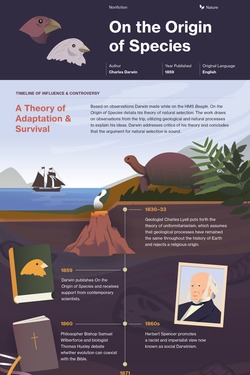 Charles Darwin wrote On the Origin of Species to explain his theory of natural selection—which argues traits advantageous to the survival of a species are those that perpetuate over time. The theory was born out of years of reflection on geological and natural processes Darwin observed during his voyage on the HMS Beagle. The work was controversial for its time. However, the processes Darwin describes in On the Origin of Species were already known by numerous scientists in the 19th century. These processes had been described by various researchers prior to the book's publication but had not been put forth as part of a comprehensive theory. Equally, while a community of scientists endorsed Darwin's theory of natural selection, a portion of the scientific community had yet to accept the age of Earth. Furthermore, they rejected uniformitarianism—the theory geological changes are the result of continuous and uniform processes—and maintained their belief in creationism—the idea all species have been created by an "intelligent designer," or higher power. Darwin's work has remained immensely influential within the scientific community, providing the basis for much of biological and ecological work today. He remains a prominent figure in the 21st century due to his theory of evolution and its controversial implications for the idea of creationism.

English naturalist Charles Darwin writes in the first person as he describes the theory of natural selection in a descriptive and authoritative tone in On the Origin of Species.

On the Origin of Species is a direct reference to the subject of the work—Charles Darwin's theory of natural selection, which argues traits advantageous to the survival of a species are those that perpetuate over time. Darwin claims this theory is how and why species originate, with the full title being, On the Origin of Species by Means of Natural Selection, or The Preservation of Favoured Races in the Struggle for Life.

This study guide and infographic for Charles Darwin's On the Origin of Species offer summary and analysis on themes, symbols, and other literary devices found in the text. Explore Course Hero's library of literature materials, including documents and Q&A pairs.

Have study documents to share about On the Origin of Species? Upload them to earn free Course Hero access!