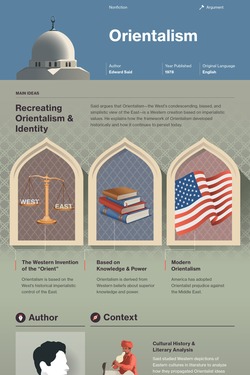 In response to Western treatment of the Middle East, Said explains how the framework of Orientalism developed historically and how it persists today. Said's text remains relevant because Western relations with the Middle East continue to be marred by enduring stereotypes and imperialist relations. The work has had an enormous impact on the field of cultural anthropology (study of human cultural variations), not just in Middle Eastern studies, but also for the development of historical anthropology (study of the historical significance of culture) and postcolonial anthropology (study of the cultural impacts of colonialism on societies). Said's method of analysis is unusual in his combination of literary analysis with anthropological themes and historical context. This method creates a rigorous framework for understanding the development and relevance of Orientalism. Equally, his argument that Orientalism is a Western creation based on imperialist values contributes to the current discourse on postcolonialism.

The cultural history of Orientalism is offered in a descriptive and authoritative tone using first-person narration.

The title Orientalism refers to a system of beliefs held by Europeans from the 18th to the 20th centuries regarding the native populations of Asia and the Middle East. These beliefs were based on inaccurate stereotypes, erroneous characterizations, and generalizations—all of which formed the impetus for the imperialist and colonial activities that take place when one country exerts political, economic, and social control over another.

This study guide and infographic for Edward W. Said's Orientalism offer summary and analysis on themes, symbols, and other literary devices found in the text. Explore Course Hero's library of literature materials, including documents and Q&A pairs.