As a tragic hero, Othello is unusual in that he is relatively passive and reactionary. His acts do not drive the plot. He is known as a man of action—a military leader, and a successful one. His eloquent words and valiant actions in battle have given him reputation and authority. But in the play, he does not take the most active role in his own character arc. Iago, in contrast, is the behind-the-scenes manipulator from the opening of the play. Othello wins Desdemona with his stories of adventure, and his love is centered on her pity and attention. He's more acted upon than actor. In true tragic form, at play's end Othello can only regain his status as "defender of the state" by committing suicide.

Iago declares early on in the play, "I am not what I am." And indeed, the audience might well leave the play wondering, who Iago is. What is his motivation for causing such utter destruction in the lives of arguably innocent people? Is he angry at being passed up for a promotion? Does he think Emilia has been sleeping with Othello? These petty motivations seem inadequate in light of the absolute thoroughness with which Iago manipulates the people around him. He's masterful at immediately assessing a person's strengths and how these strengths can be turned into weaknesses. He exploits Roderigo's desire for Desdemona and his generous hand with money. He leverages Cassio's desire to please Othello. He turns Desdemona's kindness to Cassio against both herself and Othello. And he keys in on Othello's love for Desdemona as the one weak point in Othello's character.

Desdemona begins the play with strength and purpose. She falls in love with Othello and acts on her own to elope with him, eschewing social conventions. She argues convincingly to go with him on the military mission to Cyprus. And she is unwavering in her kindness to Cassio. Through no fault of her own, her independent spirit and goodness are used against her by Iago in his plot to ruin Othello. Yet her actions on her deathbed are curious. She's ready to take the blame for her own death, and meets her death passively. These contradictions suggest that Desdemona's idea of a life of romantic adventure is a dangerous fantasy.

Michael Cassio has recently been appointed as Othello's second in command, much to the chagrin of Iago: "that never set a squadron in the field, Nor the division of a battle knows." Cassio's flaws open him up to exploitation by Iago, who seeks revenge for this appointment. Cassio is more brawn than brains, and he doesn't hold his alcohol well. He's also a flirt, who tends to characterize women as Madonnas (Desdemona) or whores ( Bianca).

In love with Desdemona, Roderigo is wealthy and foolish. He provides a steady flow of income to Iago, who has promised to help Roderigo woo Desdemona. His desperation makes him susceptible to Iago's manipulations, and Iago convinces Roderigo to help kill Cassio, who has been positioned by Iago as a rival suitor for Desdemona. In the end, Iago kills Roderigo. 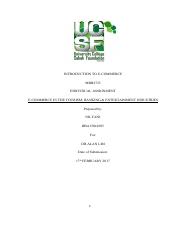 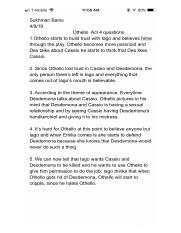 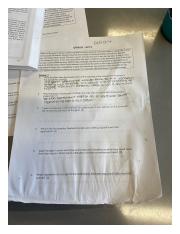