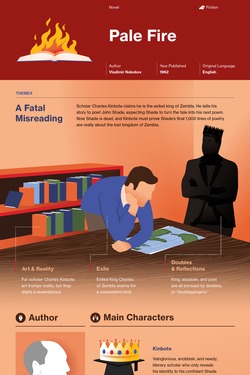 Pale Fire consists of a long poem by a fictional poet, John Shade, and a foreword, commentary, and index by the narrator, Charles Kinbote.

Most of the novel Pale Fire is told in past tense, but parts of the poem are in present tense, and Kinbote remarks on his situation in the present tense.

The title Pale Fire comes from a play by English playwright William Shakespeare, Timon of Athens (1605–08): "The moon's an arrant thief,/And her pale fire she snatches from the sun." The lines refer to the fact the moon emits no light of its own—only the glow of the sun. Similarly, commentator Charles Kinbote borrows the reflected glory of the poet John Shade. However, the relationship is sometimes reversed, since the novel's compelling narrative of an assassination appears in Kinbote's commentary.

This study guide and infographic for Vladimir Nabokov's Pale Fire offer summary and analysis on themes, symbols, and other literary devices found in the text. Explore Course Hero's library of literature materials, including documents and Q&A pairs.