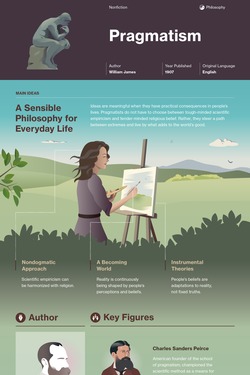 Pragmatism is a method for solving metaphysical disputes. Metaphysics is the study of the meaning, structure, and principles of reality. By comparing the practical consequences of believing in one or another metaphysical theories, a person can discern which may be the better theory. Alternatively, one can learn if, in fact, the results of opposing theories might be the same. Pragmatism also defines truth as "the good" or "the expedient." In this view truth is not static but is a process that changes in space and time according to context.

While the text of Pragmatism is written primarily in third person, the author sometimes addresses the audience with the encompassing "we" and "our" pronouns and sometimes directly references himself as "I."

The title Pragmatism refers to the name of the philosophy originated by American logician Charles Sanders Peirce (1839–1914) and further refined by William James. The text is based on a series of eight lectures in which James lays out his philosophy. Among other ideas, it asserts that the results of a philosophical concept are its sole significance. The subtitle, A New Name for Some Old Ways of Thinking, refers to the fact that pragmatism is not new. The author asserts that pragmatic ideas can be found in the thinking of predecessors ranging from Greek philosopher Aristotle (384–322 BCE) to Scottish philosopher David Hume (1711–76 CE).

This study guide and infographic for William James's Pragmatism offer summary and analysis on themes, symbols, and other literary devices found in the text. Explore Course Hero's library of literature materials, including documents and Q&A pairs.