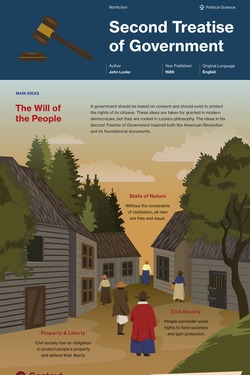 Locke wrote his Second Treatise of Government to explain his theory of how and why people form a government, or commonwealth, in society. In Locke's view, men voluntarily surrender some of their liberties in order to reap the benefits of safety and security for themselves and their property. Despite this surrender, Locke considers that the people retain their sovereignty. A government's task is to foster the well-being of the people who create it. Many of Locke's concepts had a major impact on the American (1775–83) and French (1789–99) Revolutions. These include the state of nature, the social compact, inalienable rights, consent of the governed, popular sovereignty, and the rightful dissolution of government.

Locke's work Second Treatise of Government is the second essay in a series of writings that express his ideas and philosophy on the nature of government.

This study guide and infographic for John Locke's Second Treatise of Government offer summary and analysis on themes, symbols, and other literary devices found in the text. Explore Course Hero's library of literature materials, including documents and Q&A pairs.