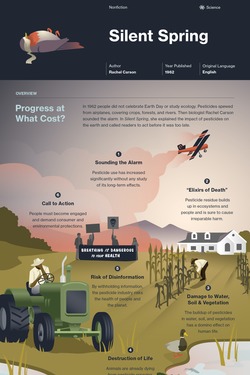 Silent Spring sparked the birth of the modern environmental movement. Rachel Carson, a biologist, viewed the relationship between people and nature as symbiotic (interrelated)—a perspective not widely understood by the public at the time. In Carson's role as a scientist, she began to study the effects of the widely used pesticide dichlorodiphenyltrichloroethane (DDT). Though she was not alone in her concern, she was unique in her ability to communicate this concern to the general public. Her expertise as a scientist and her exemplary writing abilities enabled her to craft a book that made the long-term effects of pesticides understandable to nonbiologists. Even more importantly, her gifts as a storyteller caused the public to care about environmental issues. Silent Spring was instrumental in prompting legislation against indiscriminate use of pesticides and other environmental hazards. It also helped build momentum for the formation of governmental agencies to protect the environment.

Silent Spring is a reference to English poet John Keats's work, "La Belle Dame sans Merci: A Ballad" (1819)―translated as "The Beautiful Lady without Mercy." The poem tells the tale of a knight who is obsessed with a young woman, but she leaves him. His depression brings such despair he can only see death and destruction around him: "The sedge has withered from the lake, / And no birds sing." Rachel Carson argues humanity is likewise obsessed with its own goals. People have become captivated by the "beauty" of chemicals such as pesticides that they view as a means to accomplishing their goals. However, Carson warns that the inevitable death and destruction will yield a "silent spring" when no birds sing.

This study guide and infographic for Rachel Carson's Silent Spring offer summary and analysis on themes, symbols, and other literary devices found in the text. Explore Course Hero's library of literature materials, including documents and Q&A pairs.