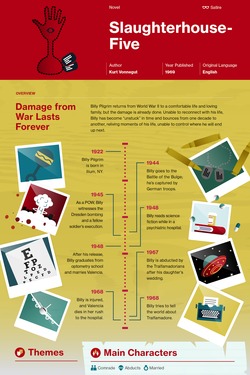 Slaughterhouse-Five is written primarily in past tense, although some paragraphs and sections are written in present tense; usually this change appears in the first paragraph of a chapter.

Slaughterhouse-Five refers to a slaughterhouse in Dresden, Germany, where American prisoners of war, including Kurt Vonnegut, were housed during the Allied bombing of the city in 1945. This draws attention to a situational irony, one in which the opposite of what is meant to happen occurs: the men survived because they were in a place constructed for death.

Vonnegut's choice of subtitle, The Children's Crusade: A Duty-Dance with Death, alludes to the disastrous Children's Crusade of 1212, a crusade enacted by young people to take back Jerusalem from the Muslims. This allusion emphasizes Vonnegut's opinion that wars are fought by those most unskilled and unprepared—that is, not by heroes but by hapless, duty-driven people who do their best to avoid being killed.

This study guide and infographic for Kurt Vonnegut's Slaughterhouse-Five offer summary and analysis on themes, symbols, and other literary devices found in the text. Explore Course Hero's library of literature materials, including documents and Q&A pairs.

War Materialism Time and Free Will
Buy this book from Amazon.com
Infographic
Cite This Study Guide