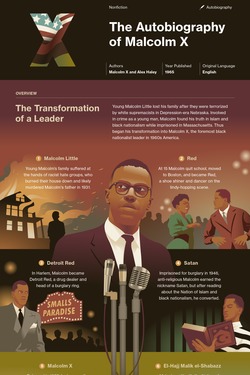 The Autobiography of Malcolm X is narrated in the first-person by Malcolm X. However, it is important to remember that there is another author here, Alex Haley, who made narrative choices in structuring this text based on numerous interviews with Malcolm X.

The Autobiography of Malcolm X is written in the past tense.

The Autobiography of Malcolm X tells the life story of prominent African American activist and nationalist Malcolm X. However, the term autobiography may not be a pure application in that a secondary author, Alex Haley, most certainly contributed to the narration of the text. In addition the use of the name Malcolm X in the title is interesting. By the end of his life, Malcolm X had changed his name again to El-Hajji El-Malik Shabazz. The use of the former name ties Malcolm X to a time and place in history regardless of his personal desire to move beyond it.

This study guide and infographic for Malcolm X and Alex Haley's The Autobiography of Malcolm X offer summary and analysis on themes, symbols, and other literary devices found in the text. Explore Course Hero's library of literature materials, including documents and Q&A pairs.

Racism and Prejudice Separatism and Unity Conversion and Reinvention Martyrdom Suspicion and Idealism
Buy this book from Amazon.com
Infographic
Cite This Study Guide

Have study documents to share about The Autobiography of Malcolm X? Upload them to earn free Course Hero access!