Literature Study GuidesThe Book Of The City Of Ladies

The Book of the City of Ladies | Study Guide 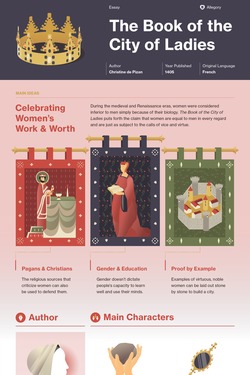 Christine de Pizan wrote The Book of the City of Ladies as a response to claims by men (historically and concurrently in her time) that women as a group are inferior to men because they are women. De Pizan is the first woman to have written on the topic of virtue, vice, and gender. The book is considered de Pizan's masterpiece and was widely read and studied by both men and women of her time as a basis of civilized conduct in the late Middle Ages (approximately the 5th to 15th centuries) into the Renaissance (approximately the 14th to 17th centuries).

The Book of the City of Ladies is directly modeled on The City of God (c. 413-25) by North African Christian theologian Saint Augustine, which was widely read and features different cities to symbolize the separation of blessed Christian men from condemned pagans, in that the state of moral faith in God (or its lack) is a "residence." De Pizan posits that women, every bit as much as men, "inhabit" a state of either vice or virtue in like company as a community housed in a city.

This study guide and infographic for Christine de Pizan's The Book of the City of Ladies offer summary and analysis on themes, symbols, and other literary devices found in the text. Explore Course Hero's library of literature materials, including documents and Q&A pairs.

Have study documents to share about The Book of the City of Ladies? Upload them to earn free Course Hero access!