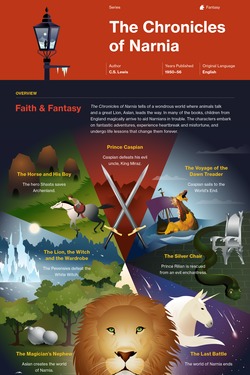 The Chronicles of Narnia weaves together tales from the magical land of Narnia, where animals talk, trees dance, and mythical creatures abound—from centaurs, giants, and dwarfs to ogres, witches, and gnomes. Narnia is sung into existence by Aslan, a mystical lion who guides all good creatures to live rightly and oppose evil. Many other worlds intersect with Narnia, from the poisoned land of Charn to Aslan's heavenly country beyond the eastern sea. Visitors from these lands influence the course of Narnian history.

Several children from England travel magically through time and space to visit Narnia, where they help to right wrongs or avert crises through acts of bravery, cooperation, and integrity. Evil witches, magicians, and foreign despots try to conquer Narnia, but with Aslan's help, the children defend this wondrous land and rule over it for many ages. Throughout it all, the characters face challenges that expose their personal weaknesses and force them to grow and change to overcome obstacles and accomplish great feats.

The Narnia series has fueled the imagination of young readers for decades and has sold more than 100 million copies in dozens of languages. It has been adapted for television, stage, radio, and film, with three studio movies grossing more than $1.6 billion worldwide. One reason for the series' enduring popularity is the relatability of its main characters. The children of Narnia are realistic, flawed, dynamic, and inspiring. They are forced to make tough choices, to empower themselves, and to draw on internal reserves of strength to work through trying situations. Moreover, even though the children exist in a fantasy world, they must contend with real-life issues faced by all of humanity, such as violence, greed, morality, and personal fulfillment. There are no easy answers in Narnia, and the characters suffer loss, fear, and anger as people in real life do. Beyond its entertainment value and personal impact on readers, though, The Chronicles of Narnia has had a wider cultural impact, particularly among Christian audiences, who often view Aslan as a symbolic Christ figure. Many of the books' themes can be seen as Christian in nature, as well, including forgiveness, self-sacrifice, faith, and courage.

The books of The Chronicles of Narnia happen in a different chronological order than their order of publication, with The Magician's Nephew (1955) relating the first events that happen in Narnia, rather than The Lion, the Witch and the Wardrobe (1950), which is usually read first in the series. In addition, there are two timelines to account for in the stories: the timeline of England and that of Narnia. While there are no dates given in the books, according the author's notes, Narnia's year 1 occurs at the land's birth in The Magician's Nephew, which is the year 1900 to Digory Kirke and Polly Plummer in England.

The events of The Chronicles of Narnia are told by an unnamed narrator who generally employs an omniscient, third-person point of view. However, the narrator sometimes uses the first-person voice to offer commentary or speak directly to the reader. In Book 3, Eustace also keeps a first-person diary.

The Chronicles of Narnia series is written in the past tense.

Narnia is the fantasy world in which the books in the Chronicles of Narnia series are set. The word chronicles describes a historical account of events arranged in time order. However, the individual books can be read in order of their publication, by the chronological events of their plots, or by their composition by the author.

This study guide and infographic for C.S. Lewis's The Chronicles of Narnia (Series) offer summary and analysis on themes, symbols, and other literary devices found in the text. Explore Course Hero's library of literature materials, including documents and Q&A pairs.

Have study documents to share about The Chronicles of Narnia (Series)? Upload them to earn free Course Hero access!