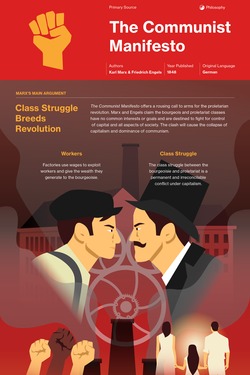 One of the most influential documents in modern history, The Communist Manifesto is simultaneously a theoretical treatise, a political program, and a revolutionary call to arms. Its purpose was to serve as the primary political document for the newly formed Communist League, an international party that was established in London in 1947. However, Karl Marx, the primary author, used the document to do even more. Most significantly it is a call for "workers of the world" to unite to overthrow the bourgeois (middle class) social order, for in the proletarian (working class) revolution, the workers have "nothing to lose but their chains." The Manifesto states that the exploitation of the many by the few is unjust and that the proletariat has a historic role to fulfill in bringing about the era of communism, thus ending class struggle.

The Communist Manifesto also lays out some fundamental principles of Marxist philosophy, including the following:

The Communist Manifesto is written in the present tense.

This study guide and infographic for Karl Marx's The Communist Manifesto offer summary and analysis on themes, symbols, and other literary devices found in the text. Explore Course Hero's library of literature materials, including documents and Q&A pairs.

Have study documents to share about The Communist Manifesto? Upload them to earn free Course Hero access!