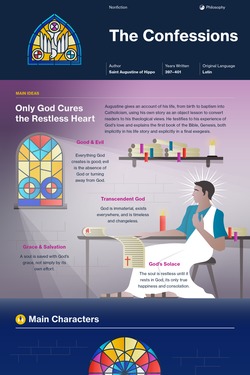 Contrary to popular belief, The Confessions is not an autobiography, since it stops after the author's conversion to Christianity in his early 30s. Nor is it merely a memoir of conversion. Some scholars say Augustine wrote The Confessions to put to rest the doubts of Church authorities about the genuineness of his conversion, especially since he was so quickly ordained a bishop. Previously he was a vocal member of the renegade Manichaeans. In the ancient Roman world, Manichaeans were a rebel sect of Christians claiming privileged, mystical knowledge and refuting many Christian beliefs that were rapidly becoming part of the mainstream. In that phase of his life Augustine had even attacked the views of Catholics. While this may be the immediate reason for writing The Confessions, it evolved into a blueprint of Augustine's vision of the Catholic Church. Moreover, as Latinist and Augustinian scholar Annemaré Kotzé points out, Augustine's conversion story is meant to convert others to his point of view.

The Confessions remains a towering achievement in its originality of thought and language. For Christians it is a foundational text that merges parts of the Greek philosophical tradition with Judeo-Christian religion and clearly explains the tenets of Christian faith. Indeed, Augustine lays out key aspects of Catholic doctrine in this text, which has been referenced by Catholics through the centuries. In the 16th century, groups of Christians broke with the Roman Catholic Church to start their own Christian movements, but they too continued to consult Augustine. Augustine's body of work, including The Confessions, has also made important contributions to Western philosophy. A few examples include his insights about knowledge and illumination (wisdom), the importance and centrality of will (subsequently taken up by the likes of Austrian neurologist Sigmund Freud, the father of psychoanalysis, and German philosopher Friedrich Nietzsche, one of the fathers of existentialist philosophy), and his novel ideas about the march of human history. His ruthless self-scrutiny in The Confessions reflects a remarkable understanding of the human psyche, while his view that human beings are made for love continues to inspire readers.

The Confessions is written in the first person and addressed directly to God. Augustine's work is an extended prayer and intimate conversation with a divine Beloved. Augustine invented the soliloquia—not quite the soliloquy today's readers think of as a monologue, but an imagined dialogue—in the case of The Confessions, between him and his creator. But he also narrates facts about his life, which both he and God already know, so he clearly has readers in mind. He is speaking to those in his own church who are suspicious of the truth of his conversion, but mostly to Manichaeans and other heretics whom he wishes to convert to Catholicism. Thus, portions of the text veer into theological and philosophical teachings or speculation.

The Confessions has often been labeled as the confessions of a man who sees himself as a great sinner, but this is incorrect. Confessio in Latin means confession of sin, praise of God (i.e., confessing one's love for God), and owning one's faith. But according to American historian Garry Wills, the title is best understood in an even wider context; the word confiteri means to corroborate and confirm, and thus Wills thinks Augustine's masterwork more aptly should be titled The Testimony in English. Augustine's Confessions is a witness to his faith and the spoken word from his heart about the truths of God.

This study guide and infographic for Saint Augustine's The Confessions offer summary and analysis on themes, symbols, and other literary devices found in the text. Explore Course Hero's library of literature materials, including documents and Q&A pairs.