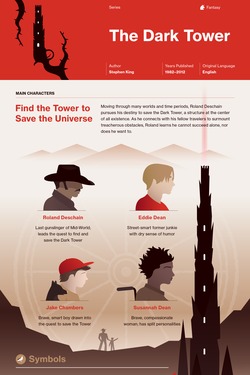 The Dark Tower is an eight-volume series composed of seven novels and one novella that trace the quest of Roland Deschain, the last gunslinger (similar to a medieval knight) in an alternate universe known as Mid-World. His objective is to reach the Dark Tower, a structure that stands at the center of six Beams that underscore all existence. By reaching the Dark Tower, Roland hopes to save it from destructive forces marshaled by the evil Crimson King who hopes to destroy the Tower and remake all existence. Mid-World exists alongside an unknown number of other worlds, including several versions of 20th-century America, from which Roland draws his companions on his adventure, known as a ka-tet. These companions are Eddie Dean, Susannah Dean, and Jake Chambers, all from New York City but from differing time periods. A doglike creature, known as a billy-bumbler in Mid-World, also accompanies the group.

Throughout the harrowing journey, the ka-tet battles the Crimson King's minions, moving between worlds and time periods in order to ensure their survival and success. Late in the quest the ka-tet discovers a writer named Stephen King in the reality they call the "Keystone World." This writer is channeling their story through his novels, and they must save his life to preserve their quest and the Dark Tower. In the end only Roland makes it to the Tower safely. He defeats the Crimson King and discovers the Tower is a physical embodiment of Gan, or God. At the top of the Tower, Gan pushes Roland through a door. Roland lands in the desert, back at the beginning of his quest—one he has made countless times before—with no memory of his past quests and a vague promise that if he makes it to the Tower one more time, he may finally find peace.

The Dark Tower series uses a third-person narrator with perspective limited to a single character within sections or chapters. Limited perspective shifts from one character to another when a new chapter or section begins.

The Dark Tower series is written in past tense.

The Dark Tower refers to the Tower at the center of the series's universe. The Tower lies at the junction of six magnetic Beams and is believed to be the linchpin that holds together the multiple worlds and timelines that make up all existence. The main character, Roland Deschain, makes the Tower the object of his quest, as he hopes to preserve the existence emanating from the Tower.

This study guide and infographic for Stephen King's The Dark Tower (Series) offer summary and analysis on themes, symbols, and other literary devices found in the text. Explore Course Hero's library of literature materials, including documents and Q&A pairs.

Have study documents to share about The Dark Tower (Series)? Upload them to earn free Course Hero access!