The Day of the Locust | Study Guide 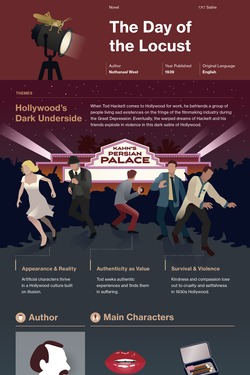 The third-person omniscient narrator in The Day of the Locust provides exposition and describes many of the main characters' motivations and observations. However, the primary narrative perspective is limited to the character of Tod Hackett, who tends to see his own darkness reflected in those he observes.

The Day of the Locust is told in the past tense.

Locusts, harmless as individuals, will swarm because of adverse climate conditions such as drought followed by heavy rains. A plague of locusts can ravage an agricultural field in a matter of hours, a large crop in a day. The day of the locust is a day of destruction in which famine is the local threat. Plagues of locusts are mentioned in the Bible and in the Koran. For some, swarming locusts are a sign of God's wrath. In the Old Testament, locusts are sent to Egypt when the Pharaoh refuses to free the Israelites held as slaves.

The Day of the Locust is set in Hollywood during the Great Depression (1929–39). The avenging "locusts" arrive in the novel's climax as a mob of disappointed people who live amidst the false opulence of Hollywood. Their wrath builds into a riot in which their rage and disappointment yield to a frenzy of self-destruction. In a sense the false world of Hollywood can be seen as a scourge to American life at a time of great social and economic upheaval.

This study guide and infographic for Nathanael West's The Day of the Locust offer summary and analysis on themes, symbols, and other literary devices found in the text. Explore Course Hero's library of literature materials, including documents and Q&A pairs.

Appearance and Reality Authenticity as Value Survival and Violence
Buy this book from Amazon.com
Infographic
Cite This Study Guide

Have study documents to share about The Day of the Locust? Upload them to earn free Course Hero access!