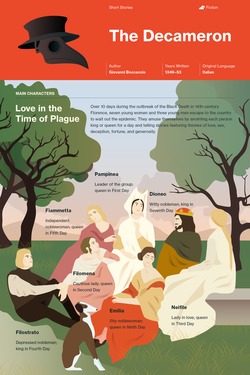 The Decameron not only changed the way prose was written by elevating common vernacular speech, it is also considered the foundation of Italian prose literature. Authors from English poet Geoffrey Chaucer, English playwright William Shakespeare, and French author Christine de Pizan to English poet John Keats, American author Edgar Allan Poe, and even German professor Martin Luther retold or restructured—or were inspired by—many stories from The Decameron. Although none of the tales told within the work reference the plague, The Decameron also serves as an important historical recording that provides insight into the physical and psychological effects of the black death epidemic in Europe during 1348.

Giovanni Boccaccio functions as the narrator in the preface and introduction of The Decameron, but the work itself is a collection of frame stories. Each day the leader of a narrative group decides on a theme and opens the day with an introduction, which is followed by 10 stories, each told by a different member of the group.

The Decameron is written in the past tense.

The Decameron, a word of Greek derivation, translates as "Ten Days Work"—a reference to the 10 stories told each day over the course of 10 days, for a total of 100. This study guide closely analyzes 21 stories, along with the Preface, the Conclusion, and the introduction to the Fourth Day, in which Boccaccio directly addresses his readers; the rest are summarized. The selected stories are the most important of those Boccaccio wrote based on their influence on other European writers and their placement in literary history. The tales are also a good example of the themes Boccaccio addressed throughout The Decameron and showcase his narrative techniques.

This study guide and infographic for Giovanni Boccaccio's The Decameron offer summary and analysis on themes, symbols, and other literary devices found in the text. Explore Course Hero's library of literature materials, including documents and Q&A pairs.