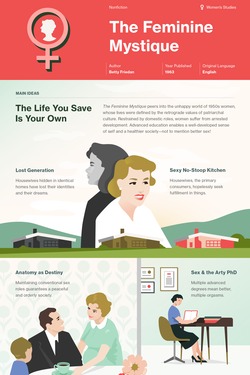 The Feminine Mystique explores the discrepancy between the everyday lives of women and false standards for their identities. With great urgency, Betty Friedan lists the life conditions of the majority of modern American women at the time: a growing birth rate, an epidemic of emotional and physical problems, a lack of identity, and a pervasive sense of emptiness. Through a series of interviews and research across several disciplines, Friedan explores this decline in the lives of American women in the short period between her own graduation from Smith College in 1941 and the 15 years that followed. Friedan notes the shift in attitudes from the many self-realized and independent women of the 1920s and 1930s to the disaffected young women in the generation following hers. She also clearly recognizes that the demand for change in women's situations must be maintained by constant pressure.

The first printing of The Female Mystique burst like a bomb on the prosperous, self-satisfied landscape of postwar America. Friedan's work challenged academic norms and expanded permissible forms of scholarship across the humanities and social sciences. Her willingness to use the first-person "I" and to express emotion, while also making a scholarly argument, was groundbreaking.

Written in the first and third person, Betty Friedan's The Feminine Mystique renews the call for change in the mid-century lives of American women.

The term "feminine mystique" is Betty Friedan's invention, describing attitudes regarding women's place in society in the 15 years after World War II. Women were expected to dedicate themselves to motherhood first and foremost, and then to homemaking and their husbands. Education and careers for women were actively discouraged.

This study guide and infographic for Betty Friedan's The Feminine Mystique offer summary and analysis on themes, symbols, and other literary devices found in the text. Explore Course Hero's library of literature materials, including documents and Q&A pairs.

Have study documents to share about The Feminine Mystique? Upload them to earn free Course Hero access!