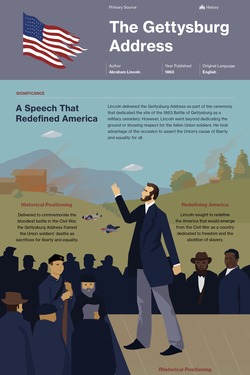 About 160,000 men (approximately 85,000 Union and 75,000 Confederate soldiers) fought in Pennsylvania during the Battle of Gettysburg during the American Civil War between the United States and the Confederate states that seceded from the Union. At least 7,000 men died during this three-day battle in July 1863, and it marked a turning point in the Civil War. In November 1863—several months after the battle, but well before the end of the Civil War—the Union dedicated part of the battlefield at Gettysburg as a cemetery for the fallen Union soldiers. President Abraham Lincoln was the second speaker in that day's ceremony. American Ambassador Edward Everett was the main and more popular speaker, and he talked for roughly two hours before Lincoln delivered his 272-word speech. Lincoln's address didn't receive a lot of attention at the time, but following his assassination in 1865 and the American centennial in 1876, people began to rethink its value. It is now considered one of the greatest speeches in American history—one that helped America redefine itself as a nation.

President Abraham Lincoln delivered this speech at Gettysburg, Pennsylvania—the site of one of the bloodiest battles of the American Civil War (1861–65). The speech was part of a day of ceremonies that included the dedication of a military cemetery at that site.

This study guide and infographic for Abraham Lincoln's The Gettysburg Address offer summary and analysis on themes, symbols, and other literary devices found in the text. Explore Course Hero's library of literature materials, including documents and Q&A pairs.

Have study documents to share about The Gettysburg Address? Upload them to earn free Course Hero access!