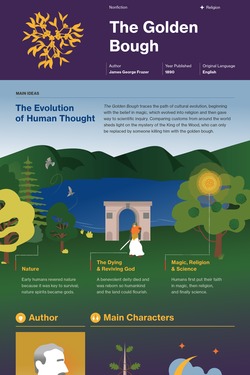 The Golden Bough was James George Frazer's attempt to solve the origin behind ancient Italy's "King of the Wood," a priest charged with protecting Nemi, a sacred lake and grove of trees devoted to the Roman goddess Diana. Periodically, a challenger fought and killed this priest for the honor of becoming the new King of the Wood. Frazer traces the anthropological roots of this custom, defining and describing religious traditions, magical practices, nature and the seasons, folk beliefs, myths, and rituals from cultures around the world. In doing so, he shows the surprising similarities among diverse cultures and makes an educated guess about the true nature and origin of the King of the Wood.

In The Golden Bough Frazer tackles a huge body of anthropological information and uses scientific inquiry and logic to synthesize these data, looking for broad patterns of human behavior. Frazer's work had an enormous impact on writers and scholars in the fields of anthropology, psychology, literature, and religion. While many of Frazer's ideas have given way over time to new theories, The Golden Bough is still an impressive achievement, and writers, artists, and scholars across various disciplines continue to study and explore it today.

In The Golden Bough Sir James George Frazer explores his personal interest in the myth of the King of the Wood at Nemi. He supports his theories with facts and evidence, but he also admits some of his notions are purely conjecture. In this and in his lyrical prose style he intentionally veers from strictly scientific writing, aiming to bring his work beyond an academic audience.

The title The Golden Bough: A Study in Comparative Religion refers to a sacred mythological plant with golden leaves and supposed magical properties, such as protection from harm. The phrasing, which James George Frazer postulates perhaps refers to mistletoe, comes from Latin poet Virgil's Aeneid, where Aeneas uses a golden bough to guarantee safe passage through the underworld.

This study guide and infographic for James George Frazer's The Golden Bough offer summary and analysis on themes, symbols, and other literary devices found in the text. Explore Course Hero's library of literature materials, including documents and Q&A pairs.

The Oak Tree The Golden Bough
Buy this book from Amazon.com
Infographic
Cite This Study Guide

Have study documents to share about The Golden Bough? Upload them to earn free Course Hero access!