Cycle of Life and Death

"The Horse Dealer's Daughter" deals with the cycle of life and death. The two main characters of the story, Mabel Pervin and Jack Fergusson, journey from near death and despair to new life in the course of a day. Mabel and her brothers have lost the family home and fortune. At the beginning of the story, the brothers discuss their situation and Mabel remains mute and apathetic. She sits "like one condemned" as her brothers discuss her fate now that the family fortune is gone and she will no longer have a home. Mabel, however, has plans to escape her fate in death. She visits her mother's grave where she feels most at home in the world of death that she inherited from her mother. She feels "a sort of ecstasy" as she plans to drown herself and join her mother in the world of death.

The beginning of the love affair between Mabel and Ferugusson, a young doctor, is steeped in imagery of death. On a winter day that was "grey, deadened," Fergusson sees Mabel tending her mother's grave. He watches her as she works in the shadow of the great looming church and is spellbound. When their eyes meet, he is mesmerized by her serious and solemn gaze. He had been feeling weak and tired from his work, but the power of her eyes brought life back into him.

Later that afternoon Fergusson watches as Mabel wades into the cold, dead water of the pond. Despite his fear of drowning, he wades into the pond and risks death to save her. He stumbles and goes underwater but manages to escape the suffocating and foul water. He carries an unconscious Mabel to the bank and restores her to life. Later at the house, Fergusson fights his emotions. He does not want to give in to his love for Mabel. But when he sees her face turning a terrible grey as the light fades from her eyes, he finds he cannot bear the "look of death in her eyes." He declares his love for her, as though saving her from death a second time. Fergusson offers love as an alternative to death for Mabel, and Mabel's love saves Fergusson from a life of boredom and loneliness. They have both crossed from drowning in death to drowning in love and life.

Through Mabel, Lawrence explores the prevailing ideas of gender roles and how traditional ideas of male masculinity and female submissiveness were changing as a result of the war. In the beginning of the story, Mabel appears to be a woman who is content to allow the men in her life to control her. She barely answers as her brothers make plans for her future. Instead of asserting herself, she sits silent and like one condemned to a life of servitude. Mabel is so accustomed to her brothers talking at and around her, rather than involving her in conversations and decisions, that she barely takes notice of them. Even Fergusson greets the men but ignores Mabel when he first enters the house. Mabel, like many women of the time, has been silenced by the men in her life.

As the story progresses, Lawrence reveals that Mabel is not the submissive and sullen creature she appears to be at first. She is self-reliant and strong. She has proudly cared for the house and her lazy and ill-behaved brothers for 10 years. She has been the one to keep the family together after the death of her mother. Her brothers talk vaguely and hopelessly about their future. They seem unable or unwilling to take control of their lives. Mabel, on the other hand, takes her life into her own hands; she would rather choose death than an unhappy life without the freedom to pilot her destiny.

"The Horse Dealer's Daughter" can be read as a love story, but it is not a conventional story of romance and happily ever after. In this story love has the power to save people from loneliness, despair, and even death, but it also has the power to force people to submit to it almost against their will. The story begins with Fergusson clearly conflicted in his feelings for Mabel. He is made uncomfortable by Mabel's gaze, yet finds himself inexplicably mesmerized by her. Mabel, for her part, appears to have no feelings for Fergusson. Fergusson saves Mabel not because he cares for her but because he is a doctor. When Mabel discovers that Fergusson has undressed her and seen her naked, she mistakes that act for love. Or does she? Some critics might argue that she manipulates the situation to her advantage. Fergusson recoils from Mabel's insistence that he loves her because that was never his intention. The narrator uses the word "horror" several times to describe Fergusson's reaction as Mabel hugs his knees. He also has "a horror of yielding to her." Mabel's love horrifies Fergusson yet he also aches for her and finally gives in to his love. Mabel insists on his love, and Fergusson agrees to marry her though that is never his intention. Despite the power of their love, the ending is uncertain. Mabel no longer seems convinced that he does want her. Lawrence portrays love as involuntary, complicated, and never certain. 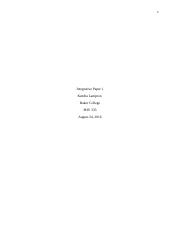 Have study documents to share about The Horse Dealer's Daughter? Upload them to earn free Course Hero access!