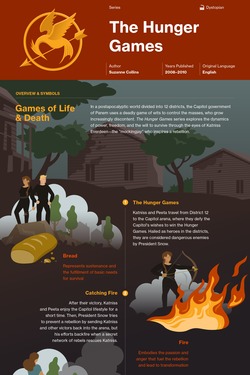 After a series of ecological disasters and a great war, the nation of Panem has risen "out of the ashes" of what was once North America. Panem, composed of a decadent Capitol ringed by 12 impoverished districts, has evolved into a brutal dictatorship. The districts provide all necessary resources for the country, and the Capitol demonstrates its power over its citizens by forcing each district to send two children each year to compete in a televised death match called the Hunger Games. But when the defiant Katniss Everdeen volunteers as a "tribute" from District 12, she ferociously plays the Game on her own terms, defying the Capitol's plans for her, and sparking a rebellion that could destroy the corrupt government that wants her dead.


The Hunger Games spent more than 200 weeks on the New York Times Best Sellers list after it was published in 2008, joined over the next two years by Catching Fire (2009) and Mockingjay (2014). The series's appeal was explained at the time by the president of the Young Adult Library Services Association, who said the books speak to "that outsider feeling [teenagers] have that the world is organized against them." But another reason for the books' continued popularity and importance in the young adult literary world is that Suzanne Collins dared to explore adult themes of corrupt politics, genocide, and the devastating effects of war in a graphic, realistic manner previously unheard of in books aimed at a younger audience. Collins also provided an important and needed addition to young adult literature with the strong, defiant character of Katniss Everdeen, whom critics have called "the most important female character in recent pop culture history," and "a role model for a new generation of young women."

The events of The Hunger Games are narrated in the first-person point of view, from the perspective of Katniss Everdeen, the main character.

The Hunger Games series is written in the present tense.

The first book in Suzanne Collins's trilogy is called The Hunger Games. The title refers to an annual televised competition that pits youth from around the nation of Panem against one another in a fight to the death. The "Games" were devised by the government as a visible demonstration of the absolute power it holds over the 12 districts under its control. The title has also become synonymous with the entire series, and therefore represents the struggle for resources, freedom, and power—everything people "hunger" for—that is evident throughout all three books. As the story progresses, The Hunger Games also becomes an example of mise en abyme, a literary technique of embedding images, concepts, or stories within a text that mirror each other in some way, such as a play within a play, or a story within a story. In this series, games are embedded within games.

This study guide and infographic for Suzanne Collins's The Hunger Games (Series) offer summary and analysis on themes, symbols, and other literary devices found in the text. Explore Course Hero's library of literature materials, including documents and Q&A pairs.

Have study documents to share about The Hunger Games (Series)? Upload them to earn free Course Hero access!