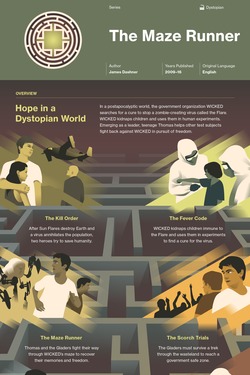 The Maze Runner series tells the story of a postapocalyptic government using human experimentation to find a cure for a rapidly spreading disease called the Flare. In the not-so-distant future, a sudden, catastrophic weather condition called a sun flare destroys a huge percentage of the population in the Northern Hemisphere. Rapidly rising water levels lead to flash tsunamis that kill thousands more. Survivors form settlements in the wilderness and live off the land, as a hastily constructed government organization, WICKED, struggles to determine how to give the remaining population the best chance at survival as resources dwindle.

The Maze Runner series is related in third person from the perspective of an unnamed narrator with limited omniscience. The narration holds closely to the protagonist Thomas's perspective throughout the series, with the exception of The Kill Order, which is narrated closely to Mark's perspective.

The Maze Runner series is primarily narrated in past tense with the exception of flashbacks, which the protagonist Thomas experiences in present tense.

This study guide and infographic for James Dashner's The Maze Runner (series) offer summary and analysis on themes, symbols, and other literary devices found in the text. Explore Course Hero's library of literature materials, including documents and Q&A pairs.

Have study documents to share about The Maze Runner (series)? Upload them to earn free Course Hero access!