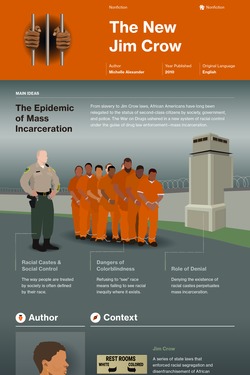 The New Jim Crow aims to challenge the benefits of living in a supposedly "colorblind" society. Such a society resists acknowledging the role that race plays in systemic institutions such as mass incarceration. The text argues that the racial caste system in America has merely been redesigned. The racial indifference spurred by the emphasis on "colorblindness" only guarantees the ongoing oppression of these institutions. The book traces the history and connections between slavery, Jim Crow, the War on Drugs, and mass incarceration.

The title The New Jim Crow refers to laws that enforced racial segregation in the South. These laws existed from the end of slavery until the civil rights movement 100 years later. The laws mandated segregation between blacks and whites in all public places. Alexander uses the reference to indicate that mass incarceration (confinement to jail or prison) is the "new" Jim Crow. It is a structure that overwhelmingly segregates black men to prison under the auspices of the War on Drugs. The extended title "The Age of Colorblindness" refers to the notion that society in the 21st century in the United States has become "colorblind" to issues of race, and therefore, society denies that race plays a factor in systems such as mass incarceration.

This study guide and infographic for Michelle Alexander's The New Jim Crow offer summary and analysis on themes, symbols, and other literary devices found in the text. Explore Course Hero's library of literature materials, including documents and Q&A pairs.

Have study documents to share about The New Jim Crow? Upload them to earn free Course Hero access!