The Once and Future King | Study Guide 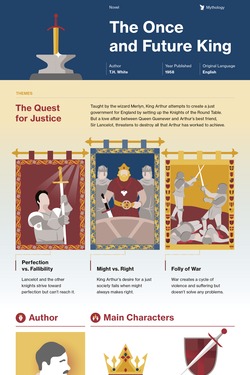 The Once and Future King is mostly told by a third-person omniscient narrator, but occasionally the author addresses the reader using the second person.

The Once and Future King is mostly told in the past tense, but occasionally the author addresses the reader using the present tense.

The title The Once and Future King comes from the Latin phrase Hic jacet Arthurus Rex quondam Rexque futurus, which, according to legend, is the epitaph on the legendary King Arthur's grave. The phrase is translated as "King once, and king in the future," but White modernized it into "The once and future king." The English writer Sir Thomas Malory (c. 1415/18–71) refers to this epitaph in his 1485 work Le Morte d'Arthur (The Death of Arthur)—a work that strongly influenced White. According to Arthurian lore, King Arthur once ruled England and will come back to rule again one day.

This study guide and infographic for T. H. White's The Once and Future King offer summary and analysis on themes, symbols, and other literary devices found in the text. Explore Course Hero's library of literature materials, including documents and Q&A pairs.

Might versus Right Folly of War Exploring Different Viewpoints Perfection versus Fallibility
Buy this book from Amazon.com
Infographic
Cite This Study Guide

Have study documents to share about The Once and Future King? Upload them to earn free Course Hero access!