The Power and the Glory | Study Guide

The Power and the Glory | Symbols

The priest is a symbol on multiple levels. In the Catholic Mass, a priest represents Jesus, as he transforms the bread and wine into the body and blood of Jesus Christ. To the Mexican people, the priest represents faith, religion, and the "old ways," which, the lieutenant explains, is "why we kill you. I have nothing against you, you understand, as a man." The lieutenant is glad Padre José chose to marry, becoming a symbol of broken promises. The whisky priest sees himself as a broken symbol, too. He represents the humanity in all people, even priests. Everyone sins; everyone makes mistakes.

The priest is also a symbol of God's love. He may be a neglectful, alcoholic, and sinful priest, but he cares for his people and gives all he can. He responds to them even when he doesn't want to, and he repeatedly denies himself opportunities to flee in favor of helping those in need. The priest shows how God can work in unexpected ways, for God does not consider sobriety or lack of sin when calling on those to do his work. The priest thinks himself unworthy of respect and martyrdom—dying for refusing to abandon one's beliefs—but at the book's end, his martyrdom has inspired others.

First, in the Catholic Mass, bread and wine are the symbolic elements of communion as they are transformed into the body and blood of Jesus to commemorate the Last Supper. Because they are used in the Mass, bread and wine—wine even more than bread—become dangerous symbols. When the priest is saying Mass and the lieutenant shows up, he must drink the wine quickly and then bite into a raw onion to hide the smell. Later, he is arrested after buying wine.

They also work as symbols of the priest's weaknesses. He wanted to be a priest because he would not have to work hard and would be well fed. Greene repeatedly states how much weight the priest has lost, now that he must struggle to find food like everyone else. Some people share their bread with the priest, but others do not. When he returns to the banana outpost and finds everyone gone, he would be grateful for bread. Instead, he has to steal from a dog. The priest is an alcoholic, but he chooses to get drunk on brandy, not wine. He carries wine with him, not drinking it, until the bottle is smashed. Thus, he honors his religion by preserving the wine rather than giving in to the sin of his alcoholism and drinking it.

Children represent the future. The lieutenant wants to remake the world for the poor children in the village. He remembers his own childhood suffering and wants to guarantee these children do not experience the same. Greene does not explicitly describe the lieutenant's childhood, but it seems clear he was poor and suffered. The Church did not help him or his family—in fact, the Church got rich off of poor people like his family. Now he wants to wipe out all the priests and religious symbols to ensure a happy future for the children he sees in the village.

Each time the priest visits a new village, he is asked to baptize the children. Villagers scrape together a little money to pay the priest, even a bad priest, so their children become part of their faith. This need for ritual may also reflect parents' fears for their children and for the future: at the time Catholics believed unbaptized children who died would not go to heaven. Children die in this book, so their concern is reasonable. If children represent the future, the future is at risk. The choice to baptize children is an expression of hope for the future. If the Church never comes back in Mexico, these children will not receive the rest of their sacraments anyway. The parents are hoping their children will have a better future.

Greene also uses children's honesty and cunning to invite readers to consider how these actions might appear to future generations. Brigitta and Coral Fellows both demonstrate unusual maturity and insight for young children; in some cases, children know more than adults or show more responsibility. Children are also more honest. They tease Padre José, tormenting him in the same way he torments himself, and a selfishly concerned Padre José worries, "Nobody can do anything with those children." Greene sees the children as representing a future that may have less room for hypocrisy. The priest admits the Church made mistakes, which the lieutenant, as a child, recognized. The priest suggests the Socialists may make similar mistakes in the future, and children will witness those as well. Each generation of children could make the world better, but not if they are obsessed only with avenging themselves against those who failed them.

The boy Luis is irritated by his mother's religious story because it does not ring true to him. Greene implies that future generations will question the Church more closely and not accept it at face value as their parents might have done. Yet Luis helps another priest at the end of the book. Greene suggests the future may include faith, but a different faith than the one that failed the lieutenant and many others like him. 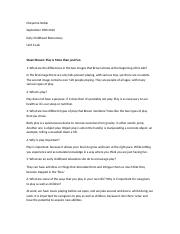 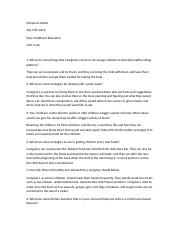 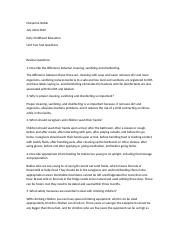 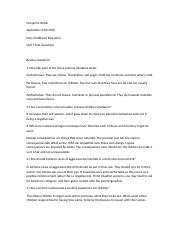 View all
Question 1 The reason many students fail exams is because they do not study. incomplete comparison lack of parallelism faulty predication dangling modifier 1 points Question 2 Scuba diving is where yo
There are 11 questions that I need help answering. The 11th is hiding in the last paragraph below. This is over the book Beloved by Toni Morrison. Thank you! 6 SENTENCES MINIMUM PER ANSWER! An MLA in-
can any one give me an argumentative essay about inter-religious marriage
Oates has specifically mentioned the "Death and the Maiden" folktales as one inspiration for this story (see "Death and the Maiden" under " Symbolism, Imagery, Allegory "). Some literary critics have
Cite This Study Guide

Have study documents to share about The Power and the Glory? Upload them to earn free Course Hero access!