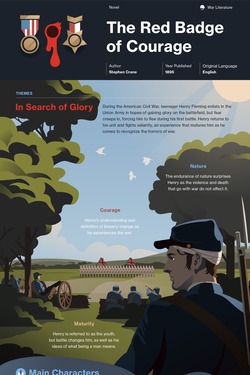 The Red Badge of Courage is told by a third-person, limited omniscient narrator with insights into Henry Fleming's thoughts. At times the narrator adopts a slightly ironic tone, however, which indicates a gap between reality and Henry's perceptions.

The Red Badge of Courage by Stephen Crane is written in the past tense.

A red badge of courage is a wound obtained while fighting and indicates that the soldier was brave and courageous in battle. In a case of situational irony where expectation and reality collide, Henry Fleming, while fleeing battle, receives his wound by another fleeing soldier who strikes him on the head with the butt of his rifle. Henry's comrades believe his story that he was wounded by an enemy's bullet.

This study guide and infographic for Stephen Crane's The Red Badge of Courage offer summary and analysis on themes, symbols, and other literary devices found in the text. Explore Course Hero's library of literature materials, including documents and Q&A pairs.

Have study documents to share about The Red Badge of Courage? Upload them to earn free Course Hero access!