The Red and the Black | Study Guide 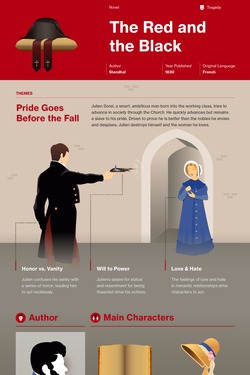 The Red and the Black uses third-person omniscient narration, and the story is told by an intrusive narrator who remains very close to the characters, often expressing opinions or hinting at alternative scenarios and frequently addressing the reader. Yet he sometimes refuses to comment on particularly dramatic scenes, leaving the reader without resolution. The narrator also shares the characters' varying and contradictory feelings and motives, which sometimes shift from moment to moment. This approach supports the idea that people are a collection of selves.

The Red and the Black is written mostly in the past tense, but the narrator often switches to present tense when addressing the reader.

The most frequent interpretation of the title The Red and the Black is that red signifies the armed forces and black, the color of priests' robes, signifies the Church; the title thus draws a parallel between the two types of clothing and the institutions they represent. The novel's protagonist, Julien Sorel, would have chosen a career in the military if he had been born early enough to fight in Napoleon's army; instead he chooses the church. However, Napoleon's army did not wear red, and the army Julien eventually joins wears blue, so some question whether this army-church interpretation is accurate. Other critics suggest red and black symbolize love and death, or the two kinds of love represented by Julien's lovers—one a warm, vibrant passion and the other a darker, perverse passion. Finally, some say Stendhal chose red and black because they are the colors of the roulette wheel—a symbol of gambling with fate.

This study guide and infographic for Stendhal's The Red and the Black offer summary and analysis on themes, symbols, and other literary devices found in the text. Explore Course Hero's library of literature materials, including documents and Q&A pairs.

Will to Power Love and Hate Honor versus Vanity Hypocrisy and Tyranny
Buy this book from Amazon.com
Infographic
Cite This Study Guide

Have study documents to share about The Red and the Black? Upload them to earn free Course Hero access!