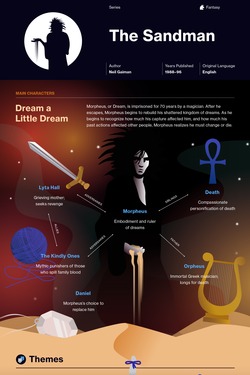 Neil Gaiman's The Sandman, in its original run, is a 10-volume collection of graphic novels. Gaiman later followed up on his creation with three unique one-off tales. They follow the adventures of Morpheus, the titular Sandman or the Lord of Dreams. He is one of the Endless—anthropomorphic representations of the concepts of Destiny, Death, Dream, Destruction, Desire, Despair, and Delirium. In Preludes and Nocturnes (1988–89), Morpheus is captured by a cult and held captive for 70 years. In The Doll's House (1989–90), Morpheus continues the work of rebuilding his kingdom while sidestepping Desire's machinations. Dream Country (1990) is the first of three graphic novels containing mostly single-issue stories that star Morpheus and his friends and family. Lucifer abdicates Hell and gives Morpheus the key in Season of Mists (1990–91). A Game of You (1991–92) focuses on Barbie, a character previously introduced in The Doll's House, and her adventures in The Land with Morpheus. Here, Morpheus appears briefly rather than as the focal point. Fables and Reflections (1993) is another graphic novel of mostly single-issue stories. It also contains "The Song of Orpheus" which details how Morpheus became estranged from his son. Morpheus and Delirium hunt down their errant brother in Brief Lives (1994). This book is followed by another collection of stories told by characters stuck at an inn in Worlds' End (1994). The Kindly Ones (1996) completes Morpheus's narrative as he and the Dreaming come under attack by the Kindly Ones. In The Wake (1997), readers learn more about Daniel—the new incarnation of Dream.

The Sandman series is written in both the past and present tense.

The Sandman refers to the main character of the series, Morpheus, the Lord of Dreams. The Sandman as a character has been part of DC Comics's stable and has gone through different incarnations of the character and reboots of the title over the decades since it was first introduced.

This study guide and infographic for Neil Gaiman's The Sandman offer summary and analysis on themes, symbols, and other literary devices found in the text. Explore Course Hero's library of literature materials, including documents and Q&A pairs.