Hester Prynne traveled to America ahead of her husband, a crippled physician significantly older than her. As time passes and he doesn't appear, she assumes he is dead. An elegant, artistic, and beautiful young woman, she engages in an affair with Arthur Dimmesdale, her pastor and a Puritan minister, and conceives a child. Spared the death sentence, the usual punishment for the sin of adultery, she is imprisoned for three months, shamed in public, and sentenced to wear the scarlet letter on her bodice to remind all of her crime. Courageous, independent, and strong, Hester rejects the Puritan community's judgment that her affair with Dimmesdale was a sin. Rather, her passionate nature inclines her to view their act of love as sacred; what they did "had a consecration of its own." She lives apart from the community by her own choice and supports herself and her daughter by doing elegant embroidery. The citizens of Boston scorn and shun her, although they eagerly buy and wear her gorgeous handiwork. Over the years Hester's kindness for those in the community earns her a new reputation: she becomes much loved and respected for her charity, good deeds, and selflessness. In this way, the A on Hester's chest comes to stand for able, and Hester is welcomed rather than scorned. She has retained her self-respect and endured with grace and dignity.

Arthur Dimmesdale is a handsome young Puritan minister. Hester's secret lover is a human being who has succumbed to his wild nature and, as a man of faith, suffers bitterly for his transgression. Unlike Hester, he believes that their love affair was indeed wicked, a violation of the seventh commandment, "Thou shalt not commit adultery." As a result of his inability to confess his guilt, Dimmesdale suffers from increasing self-hatred, despair, and mental torment. His emotional pain leads to his physical decline: he becomes pale and painfully thin. He becomes dim, a shadow of his former self, as his name suggests. Further, Dimmesdale often holds his hand over his heart as though his heart was in physical as well as emotional pain. Claiming to be helping Dimmesdale, Hester's husband, Roger Chillingworth, adds to the minister's emotional torment after his own arrival in Boston. In an attempt to rid himself of his guilt, Dimmesdale whips himself and tells his congregation that he is corrupt. Ironically, the more he protests his guilt, the holier people think he is. Many critics consider Dimmesdale rather than Hester to be the main character in The Scarlet Letter.

Roger Chillingworth is Hester's husband. He is a well-educated, well-respected medical doctor in England. He marries the young and beautiful Hester although he is much older and "misshapen." From his first appearance in the book, we see his remarkable self-control: when Chillingworth first catches sight of Hester on the scaffold, "a writhing horror twisted itself" across his face "like a snake," but he "instantaneously controlled" it. That flashing look suggests Chillingworth's horror when he sees Hester's situation. At the same time, the snake calls forth Christian symbolism and links him to Satan. His real name is Roger Prynne, but he takes the name Chillingworth to keep his identity secret. This way he can prey on Dimmesdale and so discover if his suspicion is correct and the minister was his wife's lover. He gradually destroys himself in his lust for revenge. To Hawthorne, Chillingworth committed the worst sin of all by violating as Dimmesdale says, "in cold blood, the sanctity [holiness] of the human heart." Hawthorne means that nothing is worse than prying into someone's mind to learn things they want to keep secret. Chillingworth dies shortly after Dimmesdale confesses his sin to the entire town, as his purpose for living is gone. He leaves his large fortune to Pearl, perhaps as an act of repentance for the evil he has perpetrated.

Pearl is the daughter of Hester Prynne and Arthur Dimmesdale. She is the living symbol of the scarlet letter because she was conceived from their passion. She is passionate, stubborn, and willful. Hawthorne describes her as "an imp of evil, [an] emblem and product of sin." Although used often to describe a mischievous child, the word imp also refers to a small demon or devil. Until the very end of the book, she is, Hester reflects, more like an "airy sprite [spirit]" than a human child. Her name is symbolic, as explained in the Chapter 6 Insight: in choosing Pearl's name, Hawthorne is making an allusion to the parable of the pearl from the Gospel of Matthew. Beautiful and graceful, Pearl is able to speak to the creatures in the forest and charm them into playing with her. Pearl rejects Dimmesdale before he admits his guilt, washing off the kiss he tries to give her. After Dimmesdale publicly admits his sin, however, she cries and kisses him, showing her forgiveness. The narrator comments that the scene "developed all her sympathies" and that her tears "were the pledge that she would grow up amid human joy and sorrow, nor for ever do battle with the world, but be a woman in it." 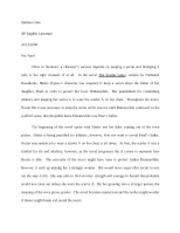 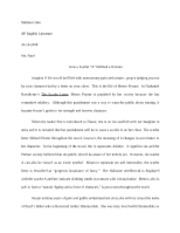 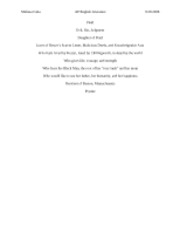 View all
two important differences between continuous cooling transformation diagrams for plain carbon and alloy steels
How does the history of lynching help us to understand issues of race and injustice in to To Kill A Mockingbird and in our world today?
After playing the Near Beer game simulation, please complete and upload the assignment as outlined in the attached file. Textbook: Pearlson, K.E. and Saunders, C.S. (2012). Managing and Using Informat
Cite This Study Guide

Have study documents to share about The Scarlet Letter? Upload them to earn free Course Hero access!