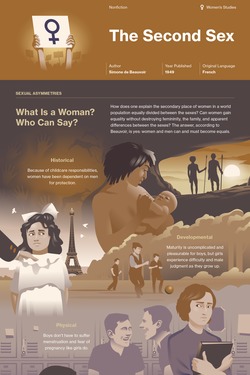 Completed in 1949, The Second Sex is a contemporary text, and its compelling argument still new. Simone de Beauvoir—working across disciplines in the social sciences, psychoanalysis, history, biology, philosophy, and anthropology—challenges ideas about the relationship between the terms masculine and feminine, or male and female, introducing the sensible yet surprising notion that the terms are not opposites. Instead, she argues that alterity characterizes the relation between the terms and between the sexes.

By alterity—a word derived from the same root as alternate and alternative—Beauvoir points to the definitive differences that characterize the relationship between these two closely related terms. Although, biologically, male and female complement each other and have sometimes been seen as two parts of a whole, they are not opposites. They are related by difference. Beauvoir traces the history of the woman's body—distinctively different from the history of the man's body—as a means of examining the subordination of women over time. Domination in this text is the patriarchal prerogative in which women are complicit. The text attempts to answer how and why women are complicit in their own oppression and why female is the second sex. No writer has ever taken quite this approach, either before or after Beauvoir.

It is important to keep in mind that in the years (1946–49) in which Beauvoir labored on this text, the sex/gender distinction in 21st-century usage was not appreciated, nor were the range of sexualities that might have influenced the number in her title. Still, the commentary here addresses the 21st-century reader despite shifting attitudes and practices.

The Second Sex is written in the second person. In her use of direct address, Beauvoir sometimes appears to be speaking to an audience of like-minded women, while her scholarly narratives, her wit, confidence, and determination address all of humankind.

The Second Sex refers to the secondary place of women in relation to a world population nearly equally divided between men and women. There are not, nor have there been in human history, two "first"—or equal—sexes.

This study guide and infographic for Simone de Beauvoir's The Second Sex offer summary and analysis on themes, symbols, and other literary devices found in the text. Explore Course Hero's library of literature materials, including documents and Q&A pairs.

Have study documents to share about The Second Sex? Upload them to earn free Course Hero access!