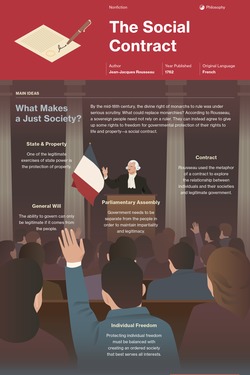 Jean-Jacques Rousseau's political thought was influenced by events of the day, contemporaries such as French lawyer Montesquieu, fellow 18th-century Enlightenment era thinkers (such as English philosopher John Locke), and Greek philosophers Aristotle and Plato. In The Social Contract Rousseau attempts to work through and synthesize features of diverse political theories. At its core is the dedication to valuing human freedom and equality, and promoting the collective goodwill.

The Social Contract, or Principles of Political Rights, is Jean-Jacques Rousseau's analysis of a legitimate state. That legitimacy derives from the idea of a contract or association entered into by free and equal people—hence the contract's "social" nature. People enter into an agreement in a civil society in order to preserve and protect themselves and their freedoms. The constitution and laws that govern public life articulate this contract; they declare the general will of the citizenry—the collective body Rousseau calls the "Sovereign."

This study guide and infographic for Jean-Jacques Rousseau's The Social Contract offer summary and analysis on themes, symbols, and other literary devices found in the text. Explore Course Hero's library of literature materials, including documents and Q&A pairs.

Have study documents to share about The Social Contract? Upload them to earn free Course Hero access!