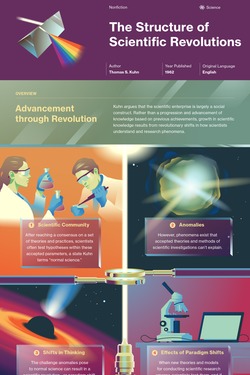 The Structure of Scientific Revolutions has become a classic work in the philosophy of science. The historical—rather than methodological—approach to changes in scientific paradigms sets Thomas S. Kuhn's work apart from previous ideas regarding the procession of science. These ideas generally treated scientific knowledge as a sort of repository to which newly discovered truths were added. The contributions themselves occurred by means of established methods. The Copernicuses, Galileos, Newtons, and Einsteins of the world used these methods particularly well, which increased the rate at which the stock of knowledge increased.

However, Kuhn argues for an entirely different way of thinking about the uniform development of scientific knowledge—one marked by a revolutionary thesis. According to Kuhn, "normal" periods in science are upended by "revolutionary" or "extraordinary" phases that redefine the conceptual paradigm for explaining phenomena.

In the early 20th century, it was commonly believed scientific discoveries and innovations occurred at a relatively stable pace, with expansions in knowledge building upon previous work. In contrast, Thomas S. Kuhn argues in The Structure of Scientific Revolutions, science undergoes revolutions, and this book is an effort to articulate their structure. A revolution in science involves a dramatic break from the existing scientific paradigm, which is replaced by a rival. This rival, in turn, is "incommensurate" with previous paradigms.

This study guide and infographic for Thomas Kuhn's The Structure of Scientific Revolutions offer summary and analysis on themes, symbols, and other literary devices found in the text. Explore Course Hero's library of literature materials, including documents and Q&A pairs.

Have study documents to share about The Structure of Scientific Revolutions? Upload them to earn free Course Hero access!