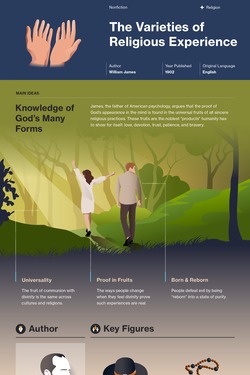 The Varieties of Religious Experience was written as a series of lectures on "natural theology" and delivered at the University of Edinburgh in Scotland. The author had a deep interest in religion, particularly in its intersection with psychology. He sought to provide a "scientific" study of religious experience and prove that such experiences were "real"—as evidenced by their power to transform individuals. James's ideas have influenced the fields of psychology, religion, and art. Some of his speculations about the subconscious mind are as profound as those of Austrian neurologist Sigmund Freud, the founder of modern psychology. Moreover, while Freud was strictly a materialist (a believer that nothing exists except matter), William James was interdisciplinary in his investigations and boldly explored altered states of consciousness associated with phenomena thought to exist in spiritual or immaterial realms. James's work, although scientifically dated, remains important as a comparative compilation of Western mysticism (spiritual paths that pursue union with the deity) and a pragmatic (practical) argument for taking religion and religious experiences seriously. The Varieties remains a beloved text for spiritually inclined artists and writers and Western practitioners of unorthodox religious paths.

The narrator of The Varieties of Religious Experience, William James, writes in both third and first person, sometimes including the reader by using the pronouns we and us and referring to himself with I and my. James extensively quotes from a variety of texts and includes many first-person accounts of religious experience.

The title The Varieties of Religious Experience refers to the many types of religious experiences William James discusses in this series of lectures. These experiences are almost entirely gleaned from people squarely within Christianity, from those who have been exposed to an alternative form of Christianity, or from those who have left Christianity but have been influenced by it. The author speaks generally about Buddhism—a religion originating in India—and about Yoga and Vedanta philosophy—also Indian. He also includes American transcendentalism in his survey, which was influenced to some degree by Indian ideas.

James indicates in his subtitle A Study in Human Nature that people universally long for transcendence; therefore, to study religious practice in all its multifarious forms is to study human nature.

This study guide and infographic for William James's The Varieties of Religious Experience offer summary and analysis on themes, symbols, and other literary devices found in the text. Explore Course Hero's library of literature materials, including documents and Q&A pairs.

Have study documents to share about The Varieties of Religious Experience? Upload them to earn free Course Hero access!