The Wealth of Nations | Study Guide 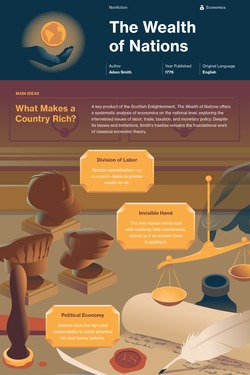 First published in 1776, The Wealth of Nations is widely regarded as the foundational work of classical economics. In it Smith sets out to challenge the predominant economic philosophy of mercantilism, advocating a largely laissez-faire system in its place. In the process, he also offers a sustained exploration of value, price, demand, and other fundamental concepts. The leading economic thinkers of subsequent generations, including British economist David Ricardo, English philosopher John Stuart Mill, and American economist Milton Friedman, were influenced by Smith's ideas on trade, taxation, and the free market.

The Wealth of Nations is written in the present tense.

Throughout An Inquiry into the Nature and Causes of the Wealth of Nations, Smith argues that the nature and origins of wealth have been grossly misunderstood. Most people, he contends—and most governments—think of money as the main, or only, kind of wealth, but this is a dangerous oversimplification. A broader definition of wealth, Smith suggests, will lead nations to adopt economic policies that truly serve their interests.

This study guide and infographic for Adam Smith's The Wealth of Nations offer summary and analysis on themes, symbols, and other literary devices found in the text. Explore Course Hero's library of literature materials, including documents and Q&A pairs.

Have study documents to share about The Wealth of Nations? Upload them to earn free Course Hero access!