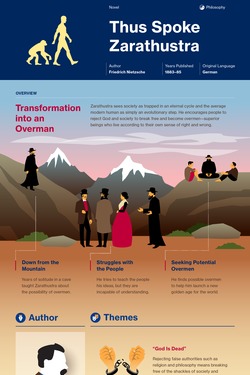 Thus Spoke Zarathustra is told in the third person by an omniscient narrator.

Thus Spoke Zarathustra is narrated in the past tense.

In Thus Spoke Zarathustra (also known as Thus Spake Zarathustra), the fictional Zarathustra is used to convey the philosophical theories of 19th-century German philosopher Friedrich Nietzsche. The character is, in part, based on the historical Iranian religious figure Zoroaster. The subtitle A Book For All and None indicates this book is for everyone, not just scholars. At the same time, American philosopher Leo Strauss suggests it is a profoundly private expression of Nietzsche's thoughts, "which as such are not communicable to anyone else and certainly not applicable by everyone else."

This study guide and infographic for Friedrich Wilhelm Nietzsche's Thus Spoke Zarathustra offer summary and analysis on themes, symbols, and other literary devices found in the text. Explore Course Hero's library of literature materials, including documents and Q&A pairs.

Overman and Overcoming Will to Power "God Is Dead"
Buy this book from Amazon.com
Infographic
Cite This Study Guide