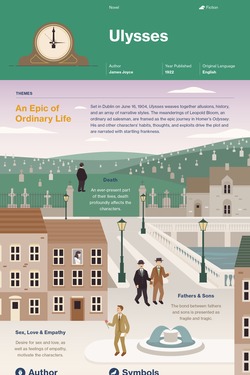 Ulysses is told in both third-person and first-person narration.

Ulysses uses a mix of past and present tense.

Ulysses is named after Odysseus ("Ulysses" is the Latin version of his name), the hero of the Greek epic poem The Odyssey, attributed to the poet Homer. Homer's epic tells of Odysseus's adventures following the Trojan War as he sails home to the island of Ithaca to rejoin his son, Telemachus, and wife, Penelope. In James Joyce's Ulysses, Stephen Dedalus and Leopold Bloom spend the day (and night) of June 16, 1904, wandering around Dublin before returning to Bloom's home. The three main characters of Ulysses—Stephen, Bloom, and Molly, Bloom's wife—parallel The Odyssey's Telemachus, Odysseus, and Penelope. In addition, names traditionally assigned by Joyce scholars (and Joyce himself) to the episodes align to events in The Odyssey.

This study guide and infographic for James Joyce's Ulysses offer summary and analysis on themes, symbols, and other literary devices found in the text. Explore Course Hero's library of literature materials, including documents and Q&A pairs.