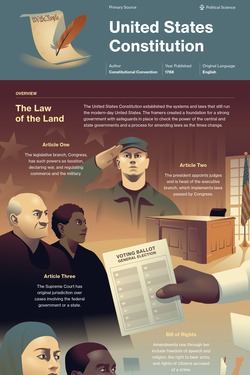 The term constitution can refer to the composition of something. More technically, it is used as a term for a document outlining a set of rules or principles governing a society or political system. It is in this latter sense that the framers chose to call the founding document of the U.S. government the Constitution.

This study guide and infographic for Various Authors's United States Constitution offer summary and analysis on themes, symbols, and other literary devices found in the text. Explore Course Hero's library of literature materials, including documents and Q&A pairs.