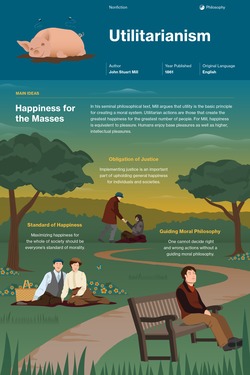 Utilitarianism was written by English moral philosopher John Stuart Mill. This humanist, non-religious, and liberal work of moral ethics was one of the most influential philosophical works of the 19th century. Mill argues in favor of a moral principle also advocated by his mentor, English philosopher Jeremy Bentham, that places human happiness as the greatest consideration for both individual moral action and proper social order. This principle—that actions are morally right if they create the greatest happiness for the greatest number of people—is called the utilitarian philosophy. Mill spends the book developing and justifying this foundational principle and then exploring potential counterarguments.

The title Utilitarianism describes the core idea of Mill's moral philosophy. The best way to act is to produce the greatest "utility," or happiness, for the greatest number of people.

This study guide and infographic for John Stuart Mill's Utilitarianism offer summary and analysis on themes, symbols, and other literary devices found in the text. Explore Course Hero's library of literature materials, including documents and Q&A pairs.