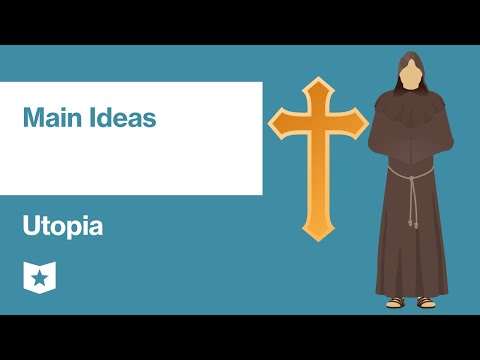 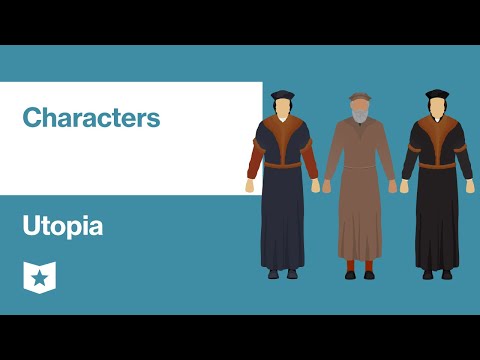 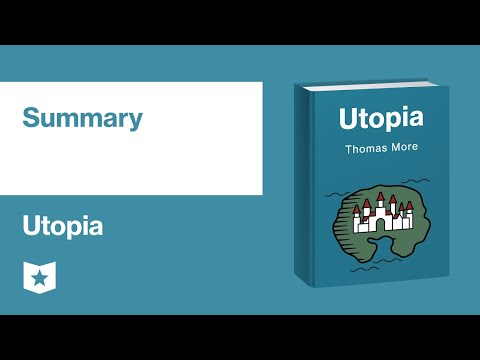 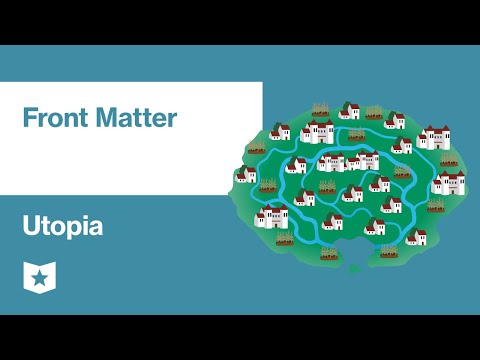 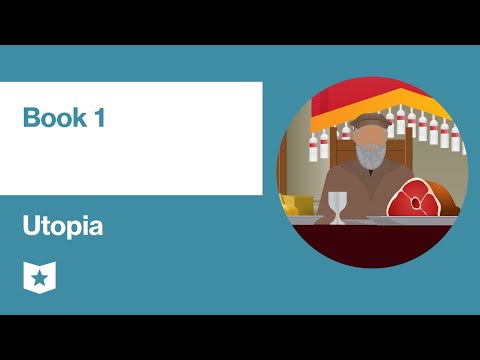 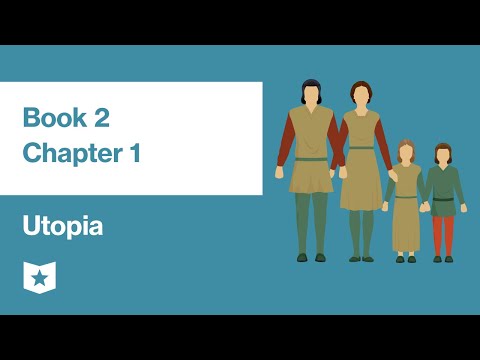 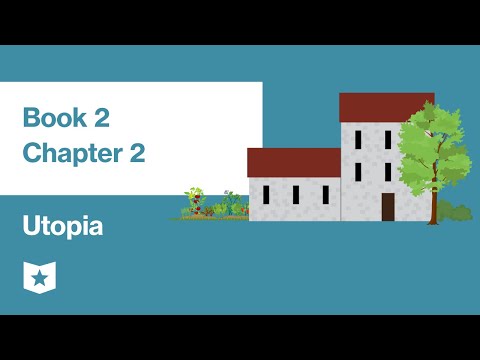 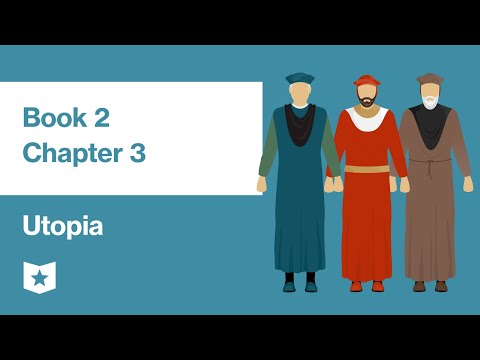 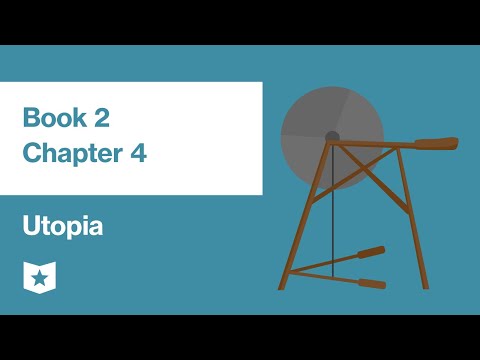 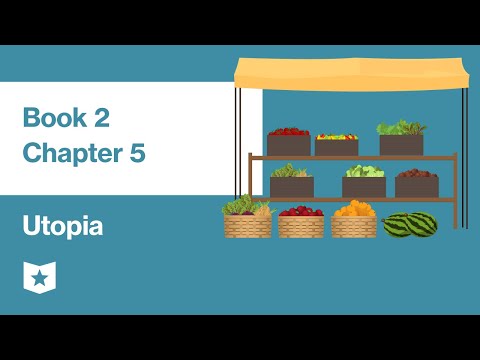 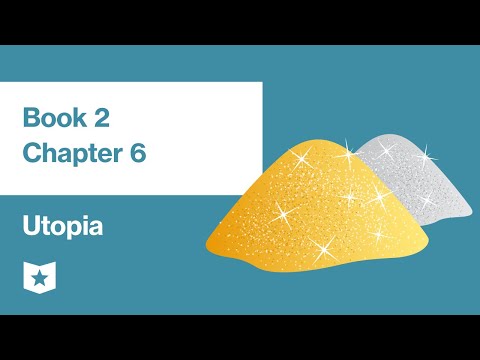 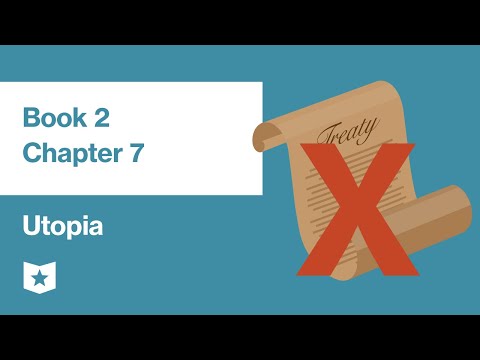 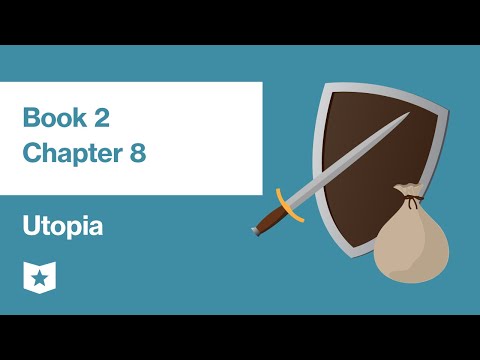 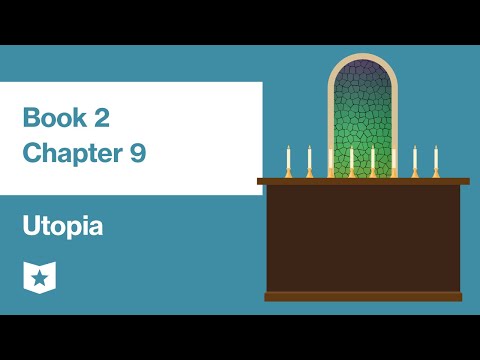 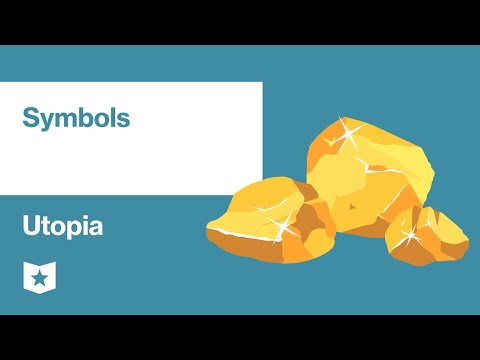 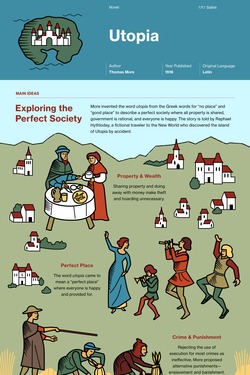 Utopia is an imaginative work of social and political satire that had a tremendous impact on both politics and literature. It marks the very first use of the term utopia to describe a "perfect place." Thomas More, the author, uses a variety of techniques to suggest that the story of a fictional "perfect place" (Utopia) is actually the story of a real place. To this end he turns real people of his acquaintance into characters in his book. He also fabricates letters to and from real people discussing Utopia.

Utopia includes front matter: fictional images, maps, letters, and other writings purported to be from Utopia. The work itself contains two books. Book One consists of a long and philosophical discussion between the author (Thomas More), a mutual friend, and the fictional Raphael Hythloday. Hythloday is a traveler who has recently returned to Flanders (Belgium) from the New World. It is in Book One that Hythloday reveals that, while on his travels, he has visited the remarkable land of Utopia.

Book Two consists of Hythloday's in-depth description of the land of Utopia. The book includes eight chapters that describe, in great detail, Utopia's geography, culture, religion, laws, and commerce. Throughout the work, More, a devout Catholic, describes an idealized world of reason. In this world, all (or at least most) share equally in wealth, prestige, education, and honor.

Utopia is a political satire written in the form of fiction. There are two narrators. The first narrator is Thomas More himself, while the second is a fictional traveler by the name of Raphael Hythloday. In the story of Utopia, More meets and has a long discussion with Hythloday. Hythloday then describes to More, in great detail, his experiences in a fantastical land called Utopia.

Thomas More invented the title word Utopia from the Greek ou-topos, which means "no place" or "nowhere." The very similar Greek word eu-topos means "a good place," so More may have intended a pun, or the use of a word to mean more than one thing. In the context of the book, the name Utopia comes from the fictional founder and conqueror of the land, General Utopus.

This study guide and infographic for Sir Thomas More's Utopia offer summary and analysis on themes, symbols, and other literary devices found in the text. Explore Course Hero's library of literature materials, including documents and Q&A pairs.