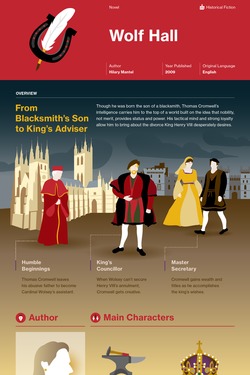 Wolf Hall is told in the present tense. In an interview with the Guardian Mantel said she chose present tense to give readers the immediacy of a "camera ... behind [Cromwell's] eyes."

Wolf Hall is the name of the Seymour family's ancestral hall. While none of the story takes place there, it is the main character's destination at the end of the novel, and the words Wolf Hall close the last sentence of the book. History will show that King Henry's determination to marry Anne Boleyn will end in his casting her off to marry Jane Seymour. Thus the title shows Cromwell caught up in and propelled by the tide of history toward an inevitable end. Mantel also uses the title to suggest the character of the court of King Henry VIII. The novel references the Latin saying homo homini lupus, "Man is a wolf to his fellow man."

This study guide and infographic for Hilary Mantel's Wolf Hall offer summary and analysis on themes, symbols, and other literary devices found in the text. Explore Course Hero's library of literature materials, including documents and Q&A pairs.

Identity Public versus Private Power and Ambition Politics and the Church
Buy this book from Amazon.com
Infographic
Cite This Study Guide