Behaviorism emerged early in the 20th century and became a significant force in American psychology. The behavioral approach suggests that the keys to understanding development are observable behavior and external stimuli in the environment. Behaviorism is a theory of learning, and learning theories focus on how we are conditioned to respond to events or stimuli. These theories explain how experience determines behavior.

Championed by psychologists such as John B. Watson (1878–1958) and B. F. Skinner (1904–1990), behaviorism rejected any reference to mind and viewed overt and observable behavior as the proper subject matter of psychology. Through the scientific study of behavior, it was hoped that laws of learning could be derived that would promote the prediction and control of behavior. Russian physiologist Ivan Pavlov (1849–1936) influenced early behaviorism in America. His work on conditioned learning, popularly referred to as classical conditioning, provided support for the notion that learning and behavior were controlled by events in the environment and could be explained with no reference to mind or consciousness (Fancher, 1987).

Video 3.6.1. How to Train a Brain explains behaviorist theories of classical and operant conditioning.

Early work in the field of behavior was conducted by the Russian physiologist Ivan Pavlov (1849–1936). Pavlov studied a form of learning behavior called a conditioned reflex, in which an animal or human produced a reflex (unconscious) response to a stimulus and, over time, was conditioned to produce the response to a different stimulus that the experimenter associated with the original stimulus. The reflex Pavlov worked with was salivation in response to the presence of food. The salivation reflex could be elicited using a second stimulus, such as a specific sound, that was presented in association with the initial food stimulus several times. Once the response to the second stimulus was “learned,” the food stimulus could be omitted. Pavlov’s “classical conditioning” is only one form of learning behavior studied by behaviorists. 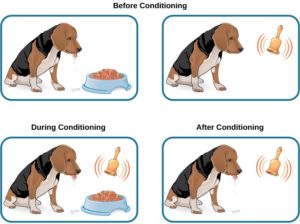 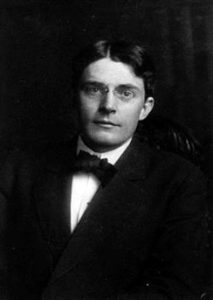 John B. Watson (1878–1958) was an influential American psychologist whose most famous work occurred during the early 20th century at Johns Hopkins University. Watson thought that the study of consciousness was flawed because objective analysis of the mind was impossible. Watson preferred to focus directly on observable behavior and try to bring that behavior under control. Watson was a major proponent of shifting the focus of psychology from the mind to behavior, and this approach of observing and controlling behavior, and is considered the father of behaviorism. A significant object of study by behaviorists was learned behavior and its interaction with inborn qualities of the organism. Behaviorism commonly used animals in experiments under the assumption that what was learned using animal models could, to some degree, be applied to human behavior. Indeed, Tolman (1938) stated, “I believe that everything important in psychology (except … such matters as involve society and words) can be investigated in essence through the continued experimental and theoretical analysis of the determiners of rat behavior at a choice-point in a maze.”

Behaviorism dominated experimental psychology for several decades, and its influence can still be felt today (Thorne & Henley, 2005). Behaviorism is largely responsible for establishing psychology as a scientific discipline through its objective methods and especially experimentation. In addition, this approach is used in behavioral and cognitive-behavioral therapy. Behavior modification is commonly used in classroom settings. Behaviorism has also led to research on environmental influences on human behavior.

B. F. Skinner (1904–1990) was an American psychologist. Like Watson, Skinner was a behaviorist, and he concentrated on how behavior was affected by its consequences. Therefore, Skinner spoke of reinforcement and punishment as major factors in driving behavior. As a part of his research, Skinner developed a chamber that allowed the careful study of the principles of modifying behavior through reinforcement and punishment. This device, known as an operant conditioning chamber (or more familiarly, a Skinner box), has remained a crucial resource for researchers studying behavior (Thorne & Henley, 2005).

The Skinner box is a chamber that isolates the subject from the external environment and has a behavior indicator such as a lever or a button. When the animal pushes the button or lever, the box can deliver a positive reinforcement of the behavior (such as food) or a punishment (such as noise) or a token conditioner (such as a light) that is correlated with either the positive reinforcement or punishment.

Skinner’s focus on positive and negative reinforcement of learned behaviors had a lasting influence in psychology that has waned somewhat since the growth of research in cognitive psychology. Despite this, conditioned learning is still used in human behavioral modification. Skinner’s two widely read and controversial popular science books about the value of operant conditioning for creating happier lives remain as thought-provoking arguments for his approach (Greengrass, 2004).

Albert Bandura’s ideas about learning were different from those of strict behaviorists. Bandura proposed a brand of behaviorism called social learning theory, which took cognitive processes and social contexts into account; it takes into consideration the dynamic and reciprocal interaction of the person, environment, and behavior. According to Bandura, pure behaviorism could not explain why learning can take place in the absence of external reinforcement. He felt that internal mental processes, like thinking and motivation, must also have a role in learning.

Observational learning is a component of Albert Bandura’s Social Learning Theory (Bandura, 1977). In observational learning, we learn by watching others and then imitating, or modeling, what they do or say. The individuals performing the imitated behavior are called models. Bandura identified three kinds of models: live, verbal, and symbolic. A live model demonstrates a behavior in person. A verbal instructional model does not perform the behavior but instead explains or describes the behavior. A symbolic model demonstrates behavior in forms of media.

Of course, we do not learn a behavior by merely observing a model. Bandura described specific steps in the process of modeling that must be followed if learning is to be successful: attention, retention, reproduction, and motivation. First, you must be focused on what the model is doing—you have to pay attention. Next, you must be able to retain, or remember, what you observed; this is retention. Then, you must be able to perform the behavior that you observed and committed to memory; this is reproduction. Finally, you must have motivation. You need to want to copy the behavior, and whether or not you are motivated depends on what happened to the model. If you saw that the model was reinforced for her behavior, you will be more motivated to copy her. This is known as vicarious reinforcement. On the other hand, if you observed the model being punished, you would be less motivated to copy her. This is called vicarious punishment.

Video 3.6.4. Albert Bandura Bobo Doll Experiment explains how learning occurs through observation and demonstrates this through his Bobo doll experiment with preschool children.

PSYC 30063 •  Polytechnic University of the Philippines