The limbic system develops years ahead of the prefrontal cortex. Development in the limbic system plays an important role in determining rewards and punishments and processing emotional experience and social information. Pubertal hormones target the amygdala directly, and powerful sensations become compelling (Romeo, 2013). Brain scans confirm that cognitive control, revealed by fMRI studies, is not fully developed until adulthood because the prefrontal cortex is limited in connections and engagement (Hartley & Somerville, 2015). Recall that this area is responsible for judgment, impulse control, and planning, and it is still maturing into early adulthood (Casey, Tottenham, Liston, & Durston, 2005). 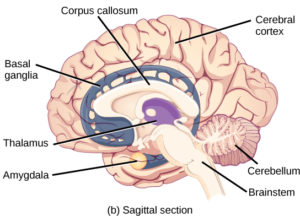 Additionally, changes in both the levels of the neurotransmitters dopamine and serotonin in the limbic system make adolescents more emotional and more responsive to rewards and stress. Dopamine is a neurotransmitter in the brain associated with pleasure and attuning to the environment during decision-making. During adolescence, dopamine levels in the limbic system increase, and the input of dopamine to the prefrontal cortex increases. The increased dopamine activity in adolescence may have implications for adolescent risk-taking and vulnerability to boredom. Serotonin is involved in the regulation of mood and behavior. It affects the brain in a different way. Known as the “calming chemical,” serotonin eases tension and stress. Serotonin also puts a brake on the excitement and sometimes recklessness that dopamine can produce. If there is a defect in the serotonin processing in the brain, impulsive or violent behavior can result.

The prefrontal cortex, the part of the frontal lobes lying just behind the forehead, is often referred to as the “CEO of the brain,” the cognitive control center. This brain region is responsible for cognitive analysis, abstract thought, the moderation of “correct” behavior in social situations, the capacity to exercise good judgment, self-regulation, and future orientation The prefrontal cortex takes in information from all of the senses and orchestrates thoughts and actions to achieve specific goals (Casey, Jones, & Hare, 2008; Walsh, 2004). Around 11 years of age, this region of the brain begins an extended process of pruning and myelination and is not complete until near the age of 25. This is one of the last regions of the brain to reach maturation. This delay may help to explain why some adolescents act the way they do. The so-called “executive functions” of the human prefrontal cortex include: 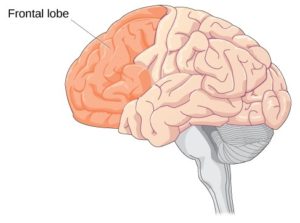 Figure 5.3.2. Brain development continues into the early 20s. The development of the frontal lobe, in particular, is important during this stage.

The difference in timing of the development of the limbic system and prefrontal cortex contributes to more risk-taking during adolescence because adolescents are motivated to seek thrills that sometimes come from risky behavior, such as reckless driving, smoking, or drinking, and have not yet developed the cognitive control to resist impulses or focus equally on the potential risks (Steinberg, 2008). One of the world’s leading experts on adolescent development, Laurence Steinberg, likens this to engaging a powerful engine before the braking system is in place. The result is that adolescents are more prone to risky behaviors than are children or adults.

MRI studies of the brain show that developmental processes tend to occur in the brain in a back-to-front pattern, explaining why the prefrontal cortex develops last. These studies have also found that teens have less white matter (myelin) in the frontal lobes of their brains when compared to adults, but this amount increases as the teen ages. With more myelin comes the growth of important brain connections, allowing for a better flow of information between brain regions. MRI research has also revealed that during adolescence, white matter increases in the corpus callosum, the bundle of nerve fibers connecting the right and left hemispheres of the brain. This allows for enhanced communication between the hemispheres and enables a full array of analytic and creative strategies to be brought to bear in responding to the complex dilemmas that may arise in a young person’s life (Giedd, 2004).

In sum, the adolescent years are a time of intense brain changes. Interestingly, two of the primary brain functions develop at different rates. Brain research indicates that the part of the brain that perceives rewards from risk, the limbic system, kicks into high gear in early adolescence. The part of the brain that controls impulses and engages in longer-term perspective, the frontal lobes, mature later. This may explain why teens in mid-adolescence take more risks than older teens.

As the frontal lobes become more developed, two things happen. First, self-control develops as teens are better able to assess cause and effect. Second, more areas of the brain become involved in processing emotions, and teens become better at accurately interpreting others’ emotions.

Video 5.3.1. Brain Changes during Adolescence describes some of the physical changes that occur during adolescence.

The Teen Brain: 6 Things to Know from the National Institute of Mental Health

But that doesn’t mean your brain is done maturing

For both boys and girls, although your brain may be as large as it will ever be, your brain doesn’t finish developing and maturing until your mid- to late-20s. The front part of the brain, called the prefrontal cortex, is one of the last brain regions to mature. It is the area responsible for planning, prioritizing, and controlling impulses.

The teen brain is ready to learn and adapt

In a digital world that is constantly changing, the adolescent brain is well prepared to adapt to new technology—and is shaped in return by experience.

Many mental disorders appear during adolescence

All the big changes the brain is experiencing may explain why adolescence is the time when many mental disorders—such as schizophrenia, anxiety, depression, bipolar disorder, and eating disorders—emerge.

The teen brain is resilient

Although adolescence is a vulnerable time for the brain and for teenagers in general, most teens go on to become healthy adults. Some changes in the brain during this important phase of development actually may help protect against long-term mental disorders.

Although it may seem like teens are lazy, science shows that melatonin levels (or the “sleep hormone” levels) in the blood naturally rise later at night and fall later in the morning than in most children and adults. This may explain why many teens stay up late and struggle with getting up in the morning. Teens should get about 9-10 hours of sleep a night, but most teens don’t get enough sleep. A lack of sleep makes paying attention hard, increases impulsivity, and may also increase irritability and depression.

The brain continues to develop into adulthood and undergoes dramatic changes during adolescence.docx

Changes in the Brain during Adolescence.docx

Your Brain Changes During Learning.docx

BA 116 •  University of the Philippines Diliman

Major Changes in Brain Structure and Function During Adolescence.docx

Adolescents and the Changes They May Experience During Adolescence.edited.docx

PSYCH AND 54170 •  University of California, Irvine

Cognitive and Emotional Changes During Adolescent.docx

The following except for one are the changes during the adolescence period.docx