Adequate adolescent nutrition is necessary for optimal growth and development. Dietary choices and habits established during adolescence greatly influence future health, yet many studies report that teens consume few fruits and vegetables and are not receiving the calcium, iron, vitamins, or minerals necessary for healthy development

One of the reasons for poor nutrition is anxiety about body image, which is a person’s idea of how his or her body looks. The way adolescents feel about their bodies can affect the way they feel about themselves as a whole. Few adolescents welcome their sudden weight increase, so they may adjust their eating habits to lose weight. Adding to the rapid physical changes, they are simultaneously bombarded by messages, and sometimes teasing, related to body image, appearance, attractiveness, weight, and eating that they encounter in the media, at home, and from their friends/peers (both in-person and via social media).

Much research has been conducted on the psychological ramifications of body image on adolescents. Modern-day teenagers are exposed to more media on a daily basis than any generation before them. Recent studies have indicated that the average teenager watches roughly 1500 hours of television per year, and 70% use social media multiple times a day. As such, adolescents are exposed to many representations of ideal, societal beauty. The concept of a person being unhappy with their own image or appearance has been defined as “body dissatisfaction.” In teenagers, body dissatisfaction is often associated with body mass, low self-esteem, and atypical eating patterns. Scholars continue to debate the effects of media on body dissatisfaction in teens. What we do know is that two-thirds of U.S. high school girls are trying to lose weight, and one-third think they are overweight, while only one-sixth are actually overweight (MMWR, June 10, 2016).

Although at the peak of physical health, a concern for early adults is the current rate of obesity. Results from the 2015 National Center for Health Statistics indicate that an estimated 70.7% of U.S. adults aged 20 and over are overweight, and 37.9% are obese (CDC, 2015b). Body mass index (BMI), expressed as weight in kilograms divided by height in meters squared (kg/m2), is commonly used to classify overweight (BMI 25.0–29.9), obesity (BMI greater than or equal to 30.0), and extreme obesity (BMI greater than or equal to 40.0). The 2015 statistics show an increase from the 2013-2014 statistics that indicated that an estimated 35.1% were obese, and 6.4% extremely obese (Fryar, Carroll, & Ogden, 2014). In 2003-2004, 32% of American adults were identified as obese. The CDC also indicated that one’s 20s are the prime time to gain weight as the average person gains one to two pounds per year from early adulthood into middle adulthood. The average man in his 20s weighs around 185 pounds and by his 30s, weighs approximately 200 pounds. The average American woman weighs 162 pounds in her 20s and 170 pounds in her 30s. 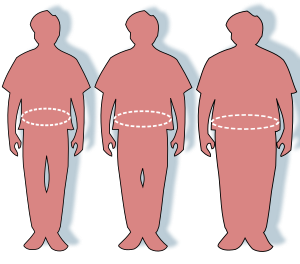 The American obesity crisis is also reflected worldwide (Wighton, 2016). In 2014, global obesity rates for men were measured at 10.8% and among women 14.9%. This translates to 266 million obese men and 375 million obese women in the world, and more people were identified as obese than underweight. Although obesity is seen throughout the world, more obese men and women live in China and the USA than in any other country. Figure 4.3  illustrates how waist circumference is also used as a measure of obesity. Figure 4.4 demonstrates the percentage of growth for males and females identified as obese between 1960 and 2012.

According to the Centers for Disease Control and Prevention (CDC) (2016), obesity originates from a complex set of contributing factors, including one’s environment, behavior, and genetics. Societal factors include culture, education, food marketing and promotion, the quality of food, and the physical activity environment available. Behaviors leading to obesity include diet, the amount of physical activity, and medication use. Lastly, there does not appear to be a single gene responsible for obesity. Rather, research has identified variants in several genes that may contribute to obesity by increasing hunger and food intake. Another genetic explanation is the mismatch between today’s environment and “energy-thrifty genes” that multiplied in the distant past when food sources were unpredictable. The genes that helped our ancestors survive occasional famines are now being challenged by environments in which food is plentiful all the time. Overall, obesity most likely results from complex interactions among the environment and multiple genes. 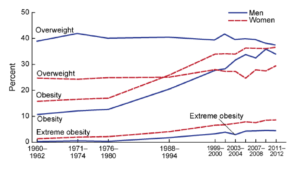 Obesity is considered to be one of the leading causes of death in the United States and worldwide. Additionally, the medical care costs of obesity in the United States were estimated to be $147 billion in 2008. According to the CDC (2016) compared to those with a normal or healthy weight, people who are obese are at increased risk for many serious diseases and health conditions, including:

Dissatisfaction with body image can explain why many teens, mostly girls, eat erratically or ingest diet pills to lose weight and why boys may take steroids to increase their muscle mass. Although eating disorders can occur in children and adults, they frequently appear during the teen years or young adulthood (NIMH, 2019). Eating disorders affect both genders, although rates among women are 2½ times greater than among men. Similar to women who have eating disorders, some men also have a distorted sense of body image, including muscle dysmorphia or an extreme concern with becoming more muscular.

Symptoms of anorexia nervosa include:

Other symptoms may develop over time, including:

For those suffering from anorexia, health consequences include an abnormally slow heart rate and low blood pressure, which increases the risk of heart failure. Additionally, there is a reduction in bone density (osteoporosis), muscle loss and weakness, severe dehydration, fainting, fatigue, and overall weakness. Anorexia nervosa has the highest mortality rate of any psychiatric disorder. Individuals with this disorder may die from complications associated with starvation, while others die of suicide. In women, suicide is much more common in those with anorexia than with most other mental disorders.

People with bulimia nervosa have recurrent and frequent episodes of eating unusually large amounts of food and feeling a lack of control over these episodes. This binge-eating is followed by behavior that compensates for overeating such as forced vomiting, excessive use of laxatives or diuretics, fasting, excessive exercise, or a combination of these behaviors. People with bulimia nervosa may be slightly underweight, normal weight, or overweight.

Symptoms of bulimia nervosa include:

The binging and purging cycle of bulimia can affect the digestive system and lead to electrolyte and chemical imbalances that can affect the heart and other major organs. Frequent vomiting can cause inflammation and possible rupture of the esophagus, as well as tooth decay and staining from stomach acids. Lastly, binge eating disorder results in similar health risks to obesity, including high blood pressure, high cholesterol levels, heart disease, Type II diabetes, and gall bladder disease (National Eating Disorders Association, 2016).

Symptoms of binge-eating disorder include:

To treat eating disorders, getting adequate nutrition, and stopping inappropriate behaviors, such as purging, are the foundations of treatment. Treatment plans are tailored to individual needs and include medical care, nutritional counseling, medications (such as antidepressants), and individual, group, and/or family psychotherapy (NIMH, 2019). For example, the Maudsley Approach has parents of adolescents with anorexia nervosa be actively involved in their child’s treatment, such as assuming responsibility for feeding their child. To eliminate binge eating and purging behaviors, cognitive behavioral therapy (CBT) assists sufferers by identifying distorted thinking patterns and changing inaccurate beliefs.

Middle childhood seems to be a great time to introduce children to organized sports, and in fact, many parents do. Nearly 3 million children play soccer in the United States (United States Youth Soccer, 2012). This activity promises to help children build social skills, improve athletically, and learn a sense of competition. However, it has been suggested that the emphasis on competition and athletic abilities can be counterproductive and lead children to grow tired of the game and want to quit. In many respects, it appears that children’s activities are no longer children’s activities once adults become involved and approach the games as adults rather than children. The U. S. Soccer Federation recently advised coaches to reduce the amount of drilling engaged in during practice and to allow children to play more freely and to choose their own positions. The hope is that this will build on their love of the game and foster their natural talents.

Sports are important for children. Children’s participation in sports has been linked to:

Yet, a study on children’s sports in the United States (Sabo & Veliz, 2008) has found that gender, poverty, location, ethnicity, and disability can limit opportunities to engage in sports. Girls were more likely to have never participated in any type of sport (see Figure 4.4.3). They also found that fathers may not be providing their daughters as much support as they do their sons.

While boys rated their fathers as their biggest mentor who taught them the most about sports, girls rated coaches, and physical education teachers as their key mentors. Sabo and Veliz also found that children in suburban neighborhoods had much higher participation in sports than boys and girls living in rural or urban centers. In addition, Caucasian girls and boys participated in organized sports at higher rates than minority children (see Figure 4.4.4). 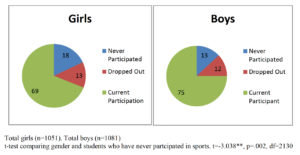 Figure 4.4.4. Participation in organized sports (%) by race and ethnicity.

Finally, Sabo and Veliz asked children who had dropped out of organized sports why they left. For both girls and boys, the number one answer was that it was no longer any fun (see Table 4.4.1). According to the Sports Policy and Research Collaborative (SPARC) (2013), almost 1 in 3 children drop out of organized sports, and while there are many factors involved in the decisions to drop out, one suggestion has been the lack of training that coaches of children’s sports receive may be contributing to this attrition (Barnett, Smoll & Smith, 1992). Several studies have found that when coaches receive proper training, the drop-out rate is about 5% instead of the usual 30% (Fraser-Thomas, Côté, & Deakin, 2005; SPARC, 2013). 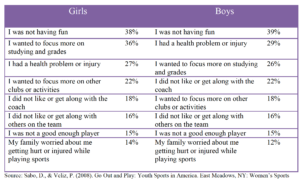 Welcome to the World of E-Sports

The recent SPARC (2016) report on the “State of Play” in the United States highlights a disturbing trend. One in four children between the ages of 5 and 16 rate playing computer games with their friends as a form of exercise. In addition, e-sports, which as SPARC writes, is about as much a sport as poker, involves children watching other children play video games. over half of males, and about 20% of females, aged 12-19, say they are fans of e-sports.

Since 2008 there has also been a downward trend in the number of sports children are engaged in, despite a body of research evidence that suggests that specializing in only one activity can increase the chances of injury while playing multiple sports is protective (SPARC, 2016). A University of Wisconsin study found that 49% of athletes who specialized in a sport experienced an injury compared with 23% of those who played multiple sports (McGuine, 2016).

For many children, physical education in school is a key component in introducing children to sports. After years of schools cutting back on physical education programs, there has been a turnaround, prompted by concerns over childhood obesity and related health issues. Despite these changes, currently, only the state of Oregon and the District of Columbia meet PE guidelines of a minimum of 150 minutes per week of physical activity in elementary school and 225 minutes in middle school (SPARC, 2016).

LG 1.2 Changes in the Health Dimensions during Adolescence (1).docx

Adolescents and the Changes They May Experience During Adolescence.edited.docx

GROWTH AND DEVELOPMENT DURING ADOLESCENCE- MCQs.docx

lockhart project Obesity in Adolescences and Their Health Concerns.docx

Parenting during adolescence into adulthood.docx

Write a paper reviewing your experiences during adolescence. Your pa.docx

,ORDER 2486296 The increase in mental health concerns amongst adolescent1.docx

The necessity of adequate connection during adolescence has been extensively demonstrated.docx