During the early 20th century, American psychology was dominated by behaviorism and psychoanalysis. However, some psychologists were uncomfortable with what they viewed as limited perspectives being so influential to the field. They objected to the pessimism and determinism (all actions driven by the unconscious) of Freud. They also disliked the reductionism, or simplifying nature, of behaviorism. Behaviorism is also deterministic at its core because it sees human behavior as entirely determined by a combination of genetics and the environment. Some psychologists began to form their own ideas that emphasized personal control, intentionality, and a true predisposition for “good” as necessary for our self-concept and our behavior. Thus, humanism emerged. Humanism is a perspective within psychology that emphasizes the potential for good that is innate to all humans. Two of the most well-known proponents of humanistic psychology are Abraham Maslow and Carl Rogers (O’Hara, n.d.).

Abraham Maslow (1908–1970) was an American psychologist who is best known for proposing a hierarchy of human needs in motivating behavior (figure below). Maslow asserted that so long as basic needs necessary for survival were met (e.g., food, water, shelter), higher-level needs (e.g., social needs) would begin to motivate behavior. According to Maslow, the highest-level needs relate to self-actualization, a process by which we achieve our full potential. The focus on the positive aspects of human nature that are characteristic of the humanistic perspective is evident (Thorne & Henley, 2005). 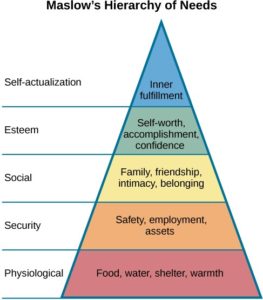 Humanistic psychologists rejected, on principle, the research approach based on reductionist experimentation in the tradition of the physical and biological sciences, because it missed the “whole” human being. Beginning with Maslow and Rogers, there was an insistence on a humanistic research program. This program has been mostly qualitative (not measurement-based), but there exist a number of quantitative research strains within humanistic psychology, including research on happiness, self-concept, meditation, and the outcomes of humanistic psychotherapy (Friedman, 2008).

Biological and Humanistic Approaches to Personality.docx

Positive psychology and the humanistic approach of psychology.docx

6.HUMANISTIC APPROACH IN THE FIELD OF PSYCHOLOGY.pptx

The humanistic approach to psychology focuses more on the social aspect.docx