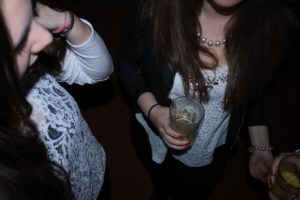 As adolescents become increasingly independent, they also develop more nuanced thinking about morality, or what is right or wrong. As adolescents’ cognitive, emotional, and social development continue to mature, their understanding of morality expands, and their behavior becomes more closely aligned with their values and beliefs. Therefore, moral development describes the evolution of these guiding principles and is demonstrated by the ability to apply these guidelines in daily life. Understanding moral development is important in this stage, where individuals make so many important decisions and gain more and more legal responsibility.

Adolescents are receptive to their culture, to the models they see at home, in school, and in the mass media. These observations influence moral reasoning and moral behavior. When children are younger, their family, culture, and religion greatly influence their moral decision-making. During the early adolescent period, peers have a much greater influence. Peer pressure can exert a powerful influence because friends play a more significant role in teens’ lives.

Furthermore, the new ability to think abstractly enables youth to recognize that rules are simply created by other people. As a result, teens begin to question the absolute authority of parents, schools, government, and other traditional institutions (Vera-Estay, Dooley, & Beauchamp, 2014). By late adolescence, most teens are less rebellious as they have begun to establish their own identity, their own belief system, and their place in the world.

Unfortunately, some adolescents have life experiences that may interfere with their moral development. Traumatic experiences may cause them to view the world as unjust and unfair. Additionally, social learning also impacts moral development. Adolescents may have observed the adults in their lives, making immoral decisions that disregarded the rights and welfare of others, leading these youth to develop beliefs and values that are contrary to the rest of society. That being said, adults have opportunities to support moral development by modeling the moral character that we want to see in our children. Parents are particularly important because they are generally the original source of moral guidance. Authoritative parenting facilitates children’s moral growth better than other parenting styles, and one of the most influential things a parent can do is to encourage the right kind of peer relations (McDevitt & Ormrod, 2004). While parents may find this process of moral development difficult or challenging, it is important to remember that this developmental step is essential to their children’s well-being and ultimate success in life.

As mentioned previously, Lawrence Kohlberg (1984) argued that moral development moves through a series of stages, and reasoning about morality becomes increasingly complex (somewhat in line with increasing cognitive skills, as per Piaget’s stages of cognitive development). In early adolescence, young people begin to care about how situational outcomes impact others and want to please and be accepted (conventional morality). At this developmental phase, people are able to value the good that can be derived from holding to social norms in the form of laws or less formalized rules. From adolescence and beyond, adolescents begin to employ abstract reasoning to justify behaviors. Moral behavior is based on self-chosen ethical principles that are generally comprehensive and universal, such as justice, dignity, and equality, which is postconventional morality.

Forming a Sense of Rights and Responsibilities

When it comes to schooling and teaching, moral choices are not restricted to occasional dramatic incidents but are woven into almost every aspect of classroom life. Imagine this simple example. Suppose that you are teaching, reading to a small group of second-graders, and the students are taking turns reading a story out loud. Should you give every student the same amount of time to read, even though some might benefit from having additional time? Or should you give more time to the students who need extra help, even if doing so bores classmates and deprives others of equal shares of “floor time”? Which option is fairer, and which is more considerate? Simple dilemmas like this happen every day at all grade levels simply because students are diverse, and because class time and a teacher’s energy are finite.

Embedded in this rather ordinary example are moral themes about fairness or justice, on the one hand, and about consideration or care on the other. It is important to keep both themes in mind when thinking about how students develop beliefs about right or wrong. A morality of justice is about human rights—or, more specifically, about respect for fairness, impartiality, equality, and individuals’ independence. A morality of care, on the other hand, is about human responsibilities—more specifically, about caring for others, showing consideration for individuals’ needs, and interdependence among individuals. Students and teachers need both forms of morality. In the next sections, therefore, we explain a major example of each type of developmental theory, beginning with the morality of justice.

The theories described so far all offer frameworks for understanding how children grow into youth and adults. Those by Maslow, Kohlberg, and Gilligan are more specific than the one by Erikson in that they focus on the development of understanding about ethics. From a teacher’s point of view, though, the theories are all limited in two ways. One problem is that they focus primarily on cognition—on what children think about ethical issues—more than on emotions and actions. The other is that they say little about how to encourage ethical development. Encouragement is part of teachers’ jobs, and doing it well requires understanding not only what students know about ethics, but also how they feel about it and what ethical actions they are prepared to take.

Many educators have recognized the need for children to be guided in the development of ethics and morals, and a number of them have, therefore, developed practical programs that integrate ethical understanding, care, and action. As a group, the programs are often called character education. However, individual programs have a variety of specific names (for example, moral dilemma education, integrative ethical education, social competence education, and many more). Details of the programs vary, but they all combine a focus on ethical knowledge with attention to ethical feelings and actions (Elkind & Sweet, 2004; Berkowitz & Bier, 2006; Narvaez, 2010). Character education programs go well beyond just teaching students to obey ethical rules, such as “Always tell the whole truth” or “Always do what the teacher tells you to do.” Such rules require very little thinking on the part of the student, and there are usually occasions in which a rule that is supposedly universal needs to be modified, “bent,” or even disobeyed. (For example, if telling the whole truth might hurt someone’s feelings, it might sometimes be more considerate—and thus more ethical—to soften the truth a bit, or even to say nothing at all.)

Instead, character education is about inviting students to think about the broad questions of his or her life, such as “What kind of person should I be?” or “How should I live my life?” Thoughtful answers to such broad questions help to answer a host of more specific questions that have ethical implications. For example, “Should I listen to the teacher right now, even if she is a bit boring, or just tune out?” or “Should I offer to help my friend with the homework she is struggling with, or hold back, so that learns to do it herself?” Most of the time, there is not enough time to reason about questions like these deliberately or consciously. Responses have to become intuitive, automatic and embodied —meaning that they have to be based on fairly immediate emotional responses (Narvaez, 2009). The goal of character education is to develop students’ capacities to respond to daily ethical choices not only consciously and cognitively, but also intuitively and emotionally. To the extent that this goal is met, students can indeed live a good, ethically responsible life.

In the most comprehensive approaches to character education, an entire school commits itself to develop students’ ethical character, despite the immense diversity among students (Minow, Schweder, & Markus, 2008). All members of the staff—not just teachers and administrators, but also custodians and educational assistants—focus on developing positive relationships with students. The underlying theme that develops is one of cooperation and mutual care, not competition. Fairness, respect, and honesty pervade class and school activities; discipline, for example, focuses on solving conflicts between students and between students and teachers, rather than on rewarding obedience or punishing wrong-doers. The approach requires significant reliance on democratic meetings and discussions, both in classrooms and wherever else groups work together in school.

Building a Culture of Kindness

Video 9.5.1. Building a Culture of Kindness with a Day of Services discusses ways that schools are building character education into their programs and the impact it is having on students.

Even if a teacher is teaching character education simply within her classroom, there are many strategies available. The goal, in this case, is to establish the classroom as a place where everyone feels included, and where everyone treats everyone else with civility and respect. Conflicts and disagreements may still occur, but in a caring community, they can be resolved without undue anger or hostility. Here are a few ways to work toward this sort of classroom:

Adolescents moral reasoning is influenced by their - PSYCH - 2450