Puberty is the period of rapid growth and sexual development that begins in adolescence and starts at some point between ages 8 and 14. While the sequence of physical changes in puberty is predictable, the onset and pace of puberty vary widely. Every person’s individual timetable for puberty is different and is primarily influenced by heredity; however, environmental factors—such as diet and exercise—also exert some influence.

Adolescence has evolved historically, with evidence indicating that this stage is lengthening as individuals start puberty earlier and transition to adulthood later than in the past. Puberty today begins, on average, at age 10–11 years for girls and 11–12 years for boys. This average age of onset has decreased gradually over time since the 19th century by 3–4 months per decade, which has been attributed to a range of factors including better nutrition, obesity, increased father absence, and other environmental factors (Steinberg, 2013). Completion of formal education, financial independence from parents, marriage, and parenthood have all been markers of the end of adolescence and beginning of adulthood, and all of these transitions happen, on average, later now than in the past. In fact, the prolonging of adolescence has prompted the introduction of a new developmental period called emerging adulthood that captures these developmental changes out of adolescence and into adulthood, occurring approximately from ages 18 to 29 (Arnett, 2000). 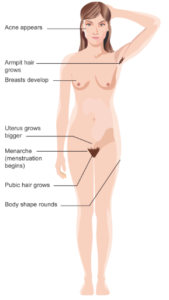 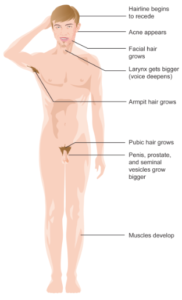 Puberty involves distinctive physiological changes in an individual’s height, weight, body composition, and circulatory and respiratory systems, and during this time, both the adrenal glands and sex glands mature. These changes are primarily influenced by hormonal activity. Many hormones contribute to the beginning of puberty, but most notably, a significant rush of estrogen for girls and testosterone for boys. Hormones play an organizational role (priming the body to behave in a certain way once puberty begins) and an activational role (triggering certain behavioral and physical changes). During puberty, the adolescent’s hormonal balance shifts sharply towards an adult state; the process is triggered by the pituitary gland, which secretes a surge of hormonal agents into the bloodstream and initiates a chain reaction.

Puberty occurs over two distinct phases, and the first phase, adrenarche, begins at 6 to 8 years of age and involves increased production of adrenal androgens that contribute to a number of pubertal changes—such as skeletal growth. The second phase of puberty, gonadarche, begins several years later and involves increased production of hormones governing physical and sexual maturation.

The male and female gonads are activated by the surge of the hormones discussed earlier, which puts them into a state of rapid growth and development. The testes primarily release testosterone, and the ovaries release estrogen; the production of these hormones increases gradually until sexual maturation is met.

For girls, observable changes begin with nipple growth and pubic hair. Then the body increases in height while fat forms, particularly on the breasts and hips. The first menstrual period (menarche) is followed by more growth, which is usually completed by four years after the first menstrual period began. Girls experience menarche usually around 12–13 years old. For boys, the usual sequence is growth of the testes, initial pubic-hair growth, growth of the penis, first ejaculation of seminal fluid (spermarche), appearance of facial hair, a peak growth spurt, deepening of the voice, and final pubic-hair growth. (Herman-Giddens et al., 2012). Boys experience spermarche, the first ejaculation, around 13–14 years old.

During puberty, both sexes experience a rapid increase in height and weight (referred to as a growth spurt) over about 2-3 years resulting from the simultaneous release of growth hormones, thyroid hormones, and androgens. Males experience their growth spurt about two years later than females. For girls, the growth spurt begins between 8 and 13 years old (average 10-11), with adult height reached between 10 and 16 years old. Boys begin their growth spurt slightly later, usually between 10 and 16 years old (average 12-13), and reach their adult height between 13 and 17 years old. Both nature (i.e., genes) and nurture (e.g., nutrition, medications, and medical conditions) can influence both height and weight.

Before puberty, there are nearly no differences between males and females in the distribution of fat and muscle. During puberty, males grow muscle much faster than females, and females experience a higher increase in body fat, and bones become harder and more brittle. An adolescent’s heart and lungs increase in both size and capacity during puberty; these changes contribute to increased strength and tolerance for exercise.

Reactions Toward Puberty and Physical Development

The accelerated growth in different body parts happens at different times, but for all adolescents, it has a fairly regular sequence. The first places to grow are the extremities (head, hands, and feet), followed by the arms and legs, and later the torso and shoulders. This non-uniform growth is one reason why an adolescent body may seem out of proportion. Additionally, because rates of physical development vary widely among teenagers, puberty can be a source of pride or embarrassment.

Most adolescents want nothing more than to fit in and not be distinguished from their peers in any way, shape, or form (Mendle, 2015). So when a child develops earlier or later than his or her peers, there can be long-lasting effects on mental health. Simply put, beginning puberty earlier than peers presents significant challenges, particularly for girls. The picture for early-developing boys isn’t as clear, but evidence suggests that they, too, eventually might suffer ill effects from maturing ahead of their peers. The biggest challenges for boys, however, seem to be more related to late development.

Early maturing girls may be teased or overtly admired, which can cause them to feel self-conscious about their developing bodies. These girls are at increased risk of a range of psychosocial problems, including depression, substance use, and early sexual behavior (Graber, 2013).These girls are also at a higher risk for eating disorders, which we will discuss in more detail later in this module (Ge, Conger, & Elder, 2001; Graber, Lewinsohn, Seeley, & Brooks-Gunn, 1997; Striegel-Moore & Cachelin, 1999).

Late maturing boys and girls (i.e., they develop more slowly than their peers) may feel self-conscious about their lack of physical development. Negative feelings are particularly a problem for late maturing boys, who are at a higher risk for depression and conflict with parents (Graber et al., 1997) and more likely to be bullied (Pollack & Shuster, 2000).

Video 4.2.1. Development in Adolescence provides an overview of physical changes during adolescence and psychosocial impacts.