Scientific knowledge is advanced through a process known as the scientific method. Basically, ideas (in the form of theories and hypotheses) are tested against the real world (in the form of empirical observations), and those empirical observations lead to more ideas that are tested against the real world, and so on. In this sense, the scientific process is circular. The types of reasoning within the circle are called deductive and inductive. In deductive reasoning, ideas are tested against the empirical world; in inductive reasoning, empirical observations lead to new ideas (Figure 2.4). These processes are inseparable, like inhaling and exhaling, but different research approaches place different emphasis on the deductive and inductive aspects. 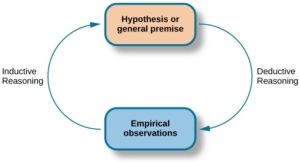 Figure 3.2.1. Psychological research relies on both inductive and deductive reasoning.

For example, case studies are heavily weighted on the side of empirical observations. Thus, case studies are closely associated with inductive processes as researchers gather massive amounts of observations and seek interesting patterns (new ideas) in the data. Experimental research, on the other hand, puts great emphasis on deductive reasoning.

What is a Theory?

We have stated that theories and hypotheses are ideas, but what sort of ideas are they, exactly? A theory is a well-developed set of ideas that propose an explanation for observed phenomena. Theories are repeatedly checked against the world, but they tend to be too complex to be tested all at once; instead, researchers create hypotheses to test specific aspects of a theory.

A hypothesis is a testable prediction about how the world will behave if our idea is correct, and it is often worded as an if-then statement (e.g., if I study all night, I will get a passing grade on the test). The hypothesis is critical because it bridges the gap between the realm of ideas and the real world. As specific hypotheses are tested, theories are modified and refined to reflect and incorporate the result of these tests (Figure 3.2). 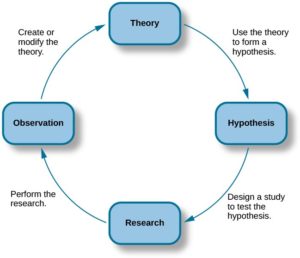 Figure 3.2.2. The scientific method of research includes proposing hypotheses, conducting research, and creating or modifying theories based on results.

To see how this process works, let us consider a specific theory and a hypothesis that might be generated from that theory. The James-Lange theory of emotion asserts that emotional experience relies on the physiological arousal associated with the emotional state. If you walked out of your home and discovered a very aggressive snake waiting on your doorstep, your heart would begin to race and your stomach churn. According to the James-Lange theory, these physiological changes would result in your feeling of fear. A hypothesis that could be derived from this theory might be that a person who is unaware of the physiological arousal that the sight of the snake elicits will not feel fear.

A scientific hypothesis is also falsifiable or capable of being shown to be incorrect. For example, Sigmund Freud had lots of interesting ideas to explain various human behaviors; however, a major criticism of Freud’s theories is that many of his ideas cannot be empirically tested and thus are not falsifiable. Despite this, Freud’s theories are widely taught in introductory psychology texts because of their historical significance for personality psychology and psychotherapy, and these remain the root of all modern forms of therapy.

In contrast, the James-Lange theory does generate falsifiable hypotheses, such as the one described above. Some individuals who suffer significant injuries to their spinal columns are unable to feel the bodily changes that often accompany emotional experiences. Therefore, we could test the hypothesis by determining how emotional experiences differ between individuals who can detect these changes in their physiological arousal and those who do not. In fact, this research has been conducted, and while the emotional experiences of people deprived of an awareness of their physiological arousal may be less intense, they still experience emotion (Chwalisz, Diener, & Gallagher, 1988).

Scientific research’s dependence on falsifiability allows for high confidence in the information that it produces. Typically, by the time information is accepted by the scientific community, it has been tested repeatedly. However, in the early years of studying development, theories were often based on philosophy and inductive reasoning, and could not always provide empirical evidence to support these ideas. In the late 1800s,  a transformation occurred when philosophy met physiology and adopted the scientific methods used by the physical sciences to explore questions about behavior and the mind.

Video 3.2.1. Hypothesis vs Theory explains the differences between the two.

Week 1- The Child and Adolescent Learners and Learning Principles.pptx