Learning, Achievement, and Work in Adolescence

Many adolescents work either summer jobs or during the school year. Holding a job may offer teenagers extra funds, the opportunity to learn new skills, ideas about future careers, and perhaps the true value of money. However, there are numerous concerns about teenagers working, especially during the school year. A long-standing concern is that that it “engenders precocious maturity of more adult-like roles and problem behaviors” (Staff, VanEseltine, Woolnough, Silver, & Burrington, 2011, p. 150). Several studies have found that working more than 20 hours per week can lead to declines in grades, a general disengagement from school (Staff, Schulenberg, & Bachman, 2010; Lee & Staff, 2007; Marsh & Kleitman, 2005), an increase in substance abuse (Longest & Shanahan, 2007), engaging in earlier sexual behavior, and pregnancy (Staff et al., 2011). 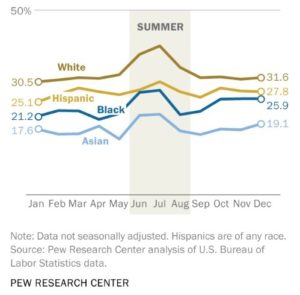 Teen employment rates have declined dramatically since 2000. Currently, only about a third of teens work. Since the late 1940s, the start of this data collection, through the 1980s, teen employment followed a predictable pattern—employment was up when the economy was good and fell when the economy was bad, but it typically remained between 46% and 58%. This trend changed following the recession of 1990-91 when teen employment did not recover as usual. Teen employment fell again during the 2001 recession, and even more during and after the 2007-09 recession. Teen employment bottomed out at about 30% in 2010, and while it has edged up slightly, it is still well below pre-recession levels. This trend is not purely American—similar declines in youth employment have been observed in other advanced economies (DeSilver, 2018). 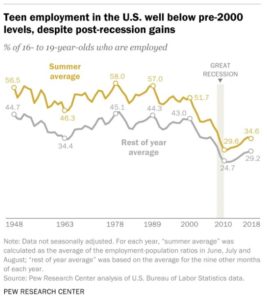 Research has examined reasons for the decline in teen employment rates since 2000 and has discovered multiple possibilities. There are fewer low-skill, entry-level jobs, such as sales clerks or office assistants, than in decades past. While most industries have seen losses in teen workers, food service is the one industry hiring more teens than in previous decades. Another reason may have to do with changes to the academic calendar. More schools are ending in late June and starting back in late August. A shortened summer break makes finding summer employment challenging. In addition, more students are taking classes over the summer, including getting a head start on college credits. More teens are also completing community service hours, often a requirement for graduation or a bolster to their college applications. Finally, more students are doing unpaid internships, which do not count toward employment statistics (DeSilver, 2018).

Video 7.4.1. Why are Fewer Teens Working Summer Jobs? is an interview with The Atlantic's Derek Thompson, author of "Teenagers Have Stopped Getting Summer Jobs—Why?" and discusses some of the reasons for the forward trend in teen employment.

Work plays a significant role in the lives of people, and adolescence is a time when we begin to explore our career options and set a course for establishing a career. Career development has a number of stages:

The American School Counselor Association (2017) recommends that school counselors aid students in their career development beginning as early as kindergarten and continue this development throughout their education.

One of the most well-known theories about career choice is from John Holland (1985), who proposed six categories of personality types based on career interests, as well as varying types of work environments. People with similar interests and personalities gravitate toward similar careers. The better matched one’s personality is to the workplace characteristics, the more satisfied and successful one is predicted to be with that career or vocational choice. Research support has been mixed, and we should note that there is more to satisfaction and success in a career than one’s personality traits or likes and dislikes. For instance, education, training, and abilities need to match the expectations and demands of the job, plus the state of the economy, availability of positions, and salary rates may play practical roles in choices about work.

The six personality types are:

To complete a free online career questionnaire and identify potential careers based on your preferences, go to: Career One Stop Questionnaire

In recent years, young adults are more likely to find themselves job-hopping and periodically returning to school for further education and retraining than in prior generations. However, researchers find that occupational interests remain fairly stable. Thus, despite the more frequent change in jobs, most people are generally seeking jobs with similar interests rather than entirely new careers (Rottinghaus, Coon, Gaffey & Zytowski, 2007).

Recent research also suggests that Millennials are looking for something different in their place of employment. According to a recent Gallup poll report (2016), Millennials want more than a paycheck; they want a purpose. Unfortunately, only 29% of Millennials surveyed by Gallup reported that they were “engaged” at work. In fact, they report being less engaged than Gen Xers and Baby Boomers, with 55% of Millennials saying they are not engaged at all with their job. This indifference to their workplace may explain the greater tendency to switch jobs. With their current job giving them little reason to stay, they are more likely to take any new opportunity to move on. Only half of Millennials saw themselves working at the same company a year later. Gallup estimates that this employment turnover and lack of engagement costs businesses $30.5 billion a year.

Neet: Neither Employed nor in Education or Training

Since teens and young adults were some of the hardest hit by the economic downturn in recent years (DeSilver, 2016), a number of young people have become NEETs, neither employed nor in education or training. While the number of young people who are NEETs has declined, there is concern that “without assistance, economically inactive young people won’t gain critical job skills and will never fully integrate into the wider economy or achieve their full earning potential” (DeSilver, 2016, para. 3). In Europe, where the rates of NEETs are persistently high, there is also concern that having such large numbers of young adults with little opportunity may increase the chances of social unrest.

In the United States, in 2015, nearly 17% of 16 to 29 year-olds were neither employed nor in school, according to data Desilver (2016) obtained from the Bureau of Labor Statistics. This is down slightly from 2013 when approximately 18.5% of this age group fit the category. As noted in Table 7.2, more women than men find themselves unemployed and not in school. Additionally, most NEETs have high school or less education, and Asians are less likely to be NEETs than any other ethnic group. 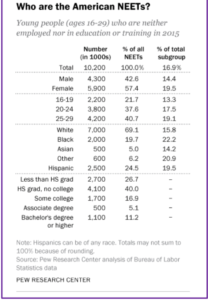 Gender also has an impact on career choices. Despite the rise in the number of women who work outside of the home, there are some career fields that are still pursued more by men than women. Jobs held by women still tend to cluster in the service sector, such as education, nursing, and child-care worker. While in more technical and scientific careers, women are greatly outnumbered by men. Jobs that have been traditionally held by women tend to have lower status, pay, benefits, and job security (Ceci & Williams, 2007).

In recent years, women have made inroads into fields once dominated by males, and today women are almost as likely as men to become medical doctors or lawyers. Despite these changes, women are more likely to have lower-status, and thus less pay than men in these professions. For instance, women are more likely to be a family practice doctor than a surgeon or are less likely to make partner in a law firm (Ceci & Williams, 2007).

PSYCH 21A •  University of California, Irvine

PSYCH 21A •  University of California, Irvine

A Career in Pediatric Psychology.docx

GSBS 6001 •  The University of Newcastle

ENGL 123 •  The University of Nairobi

Work of Organizations in Career Development.edited.docx