Sociologists who follow the functionalist approach are concerned with the way the different elements of a society contribute to the whole. They view deviance as a key component of a functioning society. Strain theory, social disorganization theory, and cultural deviance theory represent three functionalist perspectives on deviance in society.

Émile Durkheim believed that deviance is a necessary part of a successful society. One way deviance is functional, he argued, is that it challenges people’s present views (1893). For instance, when black students across the United States participated in sit-ins during the civil rights movement, they challenged society’s notions of segregation. Moreover, Durkheim noted, when deviance is punished, it reaffirms currently held social norms, which also contributes to society (1893). Seeing a student given detention for skipping class reminds other high schoolers that playing hooky isn’t allowed and that they, too, could get detention.

Sociologist Robert Merton agreed that deviance is an inherent part of a functioning society, but he expanded on Durkheim’s ideas by developing strain theory, which notes that access to socially acceptable goals plays a part in determining whether a person conforms or deviates. From birth, we’re encouraged to achieve the “American Dream” of financial success. A woman who attends business school, receives her MBA, and goes on to make a million-dollar income as CEO of a company is said to be a success. However, not everyone in our society stands on equal footing. A person may have the socially acceptable goal of financial success but lack a socially acceptable way to reach that goal. According to Merton’s theory, an entrepreneur who can’t afford to launch his own company may be tempted to embezzle from his employer for start-up funds.

Developed by researchers at the University of Chicago in the 1920s and 1930s, social disorganization theory asserts that crime is most likely to occur in communities with weak social ties and the absence of social control. An individual who grows up in a poor neighborhood with high rates of drug use, violence, teenage delinquency, and deprived parenting is more likely to become a criminal than an individual from a wealthy neighborhood with a good school system and families who are involved positively in the community. 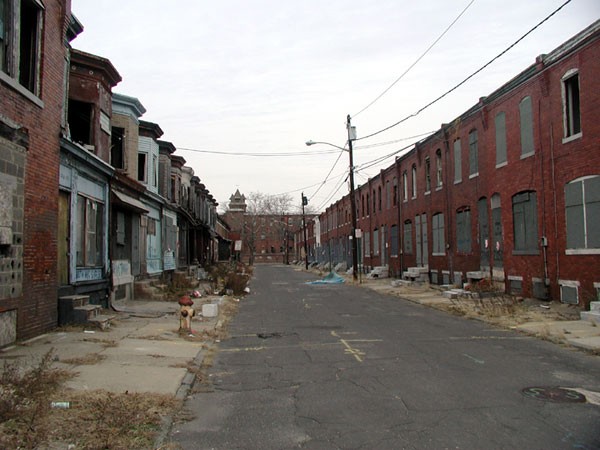 Proponents of social disorganization theory believe that individuals who grow up in impoverished areas are more likely to participate in deviant or criminal behaviors. (Photo courtesy of Apollo 1758/Wikimedia Commons)

Social disorganization theory points to broad social factors as the cause of deviance. A person isn’t born a criminal but becomes one over time, often based on factors in his or her social environment. Research into social disorganization theory can greatly influence public policy. For instance, studies have found that children from disadvantaged communities who attend preschool programs that teach basic social skills are significantly less likely to engage in criminal activity. 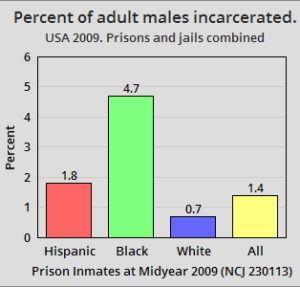 2009. Percent of adult males incarcerated by race and ethnicity.

They found that violence and crime were at their worst in the middle of the city and gradually decreased the farther someone traveled from the urban center toward the suburbs. Shaw and McKay noticed that this pattern matched the migration patterns of Chicago citizens. New immigrants, many of them poor and lacking knowledge of the English language, lived in neighborhoods inside the city. As the urban population expanded, wealthier people moved to the suburbs and left behind the less privileged.

Shaw and McKay concluded that socioeconomic status correlated to race and ethnicity resulted in a higher crime rate. The mix of cultures and values created a smaller society with different ideas of deviance, and those values and ideas were transferred from generation to generation.

The theory of Shaw and McKay has been further tested and expounded upon by Robert Sampson and Byron Groves (1989). They found that poverty, ethnic diversity, and family disruption in given localities had a strong positive correlation with social disorganization. They also determined that social disorganization was, in turn, associated with high rates of crime and delinquency—or deviance. Recent studies Sampson conducted with Lydia Bean (2006) revealed similar findings. High rates of poverty and single-parent homes correlated with high rates of juvenile violence.

1. According to social disorganization theory, crime is most likely to occur where?

social disorganization theory:
a theory that asserts crime occurs in communities with weak social ties and the absence of social control