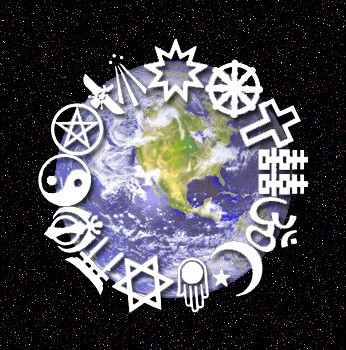 The symbols of fourteen religions are depicted here. In no particular order, they represent Judaism, Wicca, Taoism, Christianity, Confucianism, Baha’i, Druidism, Islam, Hinduism, Zoroastrianism, Shinto, Jainism, Sikhism, and Buddhism. Can you match the symbol to the religion? What might a symbolic interactionist make of these symbols? (Photo courtesy of ReligiousTolerance.org)

The major religions of the world (Hinduism, Buddhism, Islam, Confucianism, Christianity, Taoism, and Judaism) differ in many respects, including how each religion is organized and the belief system each upholds. Other differences include the nature of belief in a higher power, the history of how the world and the religion began, and the use of sacred texts and objects.

Religions organize themselves—their institutions, practitioners, and structures—in a variety of fashions. For instance, when the Roman Catholic Church emerged, it borrowed many of its organizational principles from the ancient Roman military and turned senators into cardinals, for example. Sociologists use different terms, like ecclesia, denomination, and sect, to define these types of organizations. Scholars are also aware that these definitions are not static. Most religions transition through different organizational phases. For example, Christianity began as a cult, transformed into a sect, and today exists as an ecclesia.

Cults, like sects, are new religious groups. In the United States today this term often carries pejorative connotations. However, almost all religions began as cults and gradually progressed to levels of greater size and organization. The term cult is sometimes used interchangeably with the term new religious movement (NRM). In its pejorative use, these groups are often disparaged as being secretive, highly controlling of members’ lives, and dominated by a single, charismatic leader.

Controversy exists over whether some groups are cults, perhaps due in part to media sensationalism over groups like polygamous Mormons or the Peoples Temple followers who died at Jonestown, Guyana. Some groups that are controversially labeled as cults today include the Church of Scientology and the Hare Krishna movement.

Occasionally, a sect is a breakaway group that may be in tension with larger society. They sometimes claim to be returning to “the fundamentals” or to contest the veracity of a particular doctrine. When membership in a sect increases over time, it may grow into a denomination. Often a sect begins as an offshoot of a denomination, when a group of members believes they should separate from the larger group. 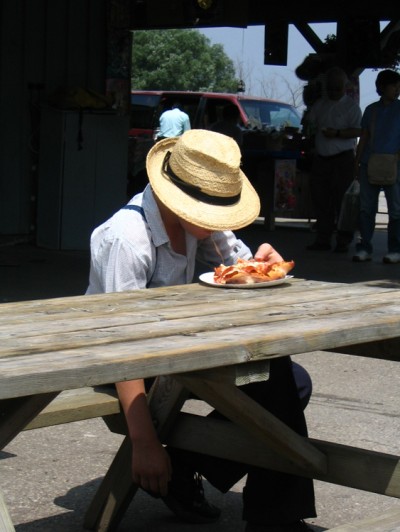 How might you classify the Mennonites? As a cult, a sect, or a denomination? (Photo courtesy of Frenkieb/flickr).

A denomination is a large, mainstream religious organization, but it does not claim to be official or state sponsored. It is one religion among many. For example, Baptist, African Methodist Episcopal, Catholic, and Seventh-day Adventist are all Christian denominations.

The term ecclesia, originally referring to a political assembly of citizens in ancient Athens, Greece, now refers to a congregation. In sociology, the term is used to refer to a religious group that most all members of a society belong to. It is considered a nationally recognized, or official, religion that holds a religious monopoly and is closely allied with state and secular powers. The United States does not have an ecclesia by this standard; in fact, this is the type of religious organization that many of the first colonists came to America to escape.

One way to remember these religious organizational terms is to think of cults, sects, denominations, and ecclesia representing a continuum, with increasing influence on society, where cults are least influential and ecclesia are most influential.

Scholars from a variety of disciplines have strived to classify religions. One widely accepted categorization that helps people understand different belief systems considers what or who people worship (if anything). Using this method of classification, religions might fall into one of these basic categories, as shown in the table below.

Note that some religions may be practiced—or understood—in various categories. For instance, the Christian notion of the Holy Trinity (God, Jesus, Holy Spirit) defies the definition of monotheism, which is a religion based on belief in a single deity, to some scholars. Similarly, many Westerners view the multiple manifestations of Hinduism’s godhead as polytheistic, which is a religion based on belief in multiple deities, while Hindus might describe those manifestations are a monotheistic parallel to the Christian Trinity. Some Japanese practice Shinto, which follows animism, which is a religion that believes in the divinity of nonhuman beings, like animals, plants, and objects of the natural world, while people who practice totemism believe in a divine connection between humans and other natural beings.

It is also important to note that every society also has nonbelievers, such as atheists, who do not believe in a divine being or entity, and agnostics, who hold that ultimate reality (such as God) is unknowable. While typically not an organized group, atheists and agnostics represent a significant portion of the population. It is important to recognize that being a nonbeliever in a divine entity does not mean the individual subscribes to no morality. Indeed, many Nobel Peace Prize winners and other great humanitarians over the centuries would have classified themselves as atheists or agnostics.

1. What are some denominations of the Christian Protestant church?

b
3. The main difference between an ecclesia and a denomination is:

c
4. Some controversial groups that may be mislabeled as cults include:

5. In what part of the world have Confucianism and Taoism been primarily practiced?

animism:
the religion that believes in the divinity of nonhuman beings, like animals, plants, and objects of the natural world

atheism:
the belief in no deities

cults:
religious groups that are small, secretive, and highly controlling of members and have a charismatic leader

denomination:
a large, mainstream religion that is not sponsored by the state

ecclesia:
a religion that is considered the state religion

established sects:
sects that last but do not become denominations

monotheism:
a religion based on belief in a single deity

polytheism:
a religion based on belief in multiple deities

sect:
a small, new offshoot of a denomination

totemism:
the belief in a divine connection between humans and other natural beings

PHILOSOPHY CRS •  The University of Nairobi

Group 2- The Relationship Between Religion and Globalization.docx

BSPSY 1 •  Polytechnic University of the Philippines

There are various types of religions found in the world.docx

The traditional types of change in religion.docx

Types of Religion and Biblical Foundation.docx